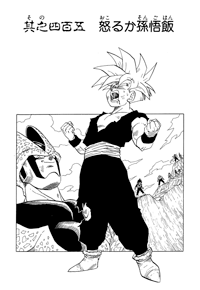 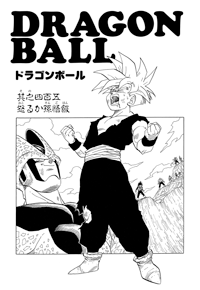 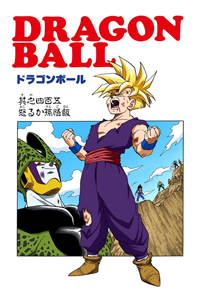 Will Son Gohan Get Angry?

Cell elbows Gohan on the back of the neck, and then kicks him off. He rushes after Gohan, as Gohan lands, then punches at him. But Gohan jumps over it, and then kicks Cell in the face, knocking Cell to the ground. Cell gets back to his feet, wipes a trickle of blood from the side of his mouth, and says he’ll make Gohan angry at all costs. Goku thinks it’s good that Cell is trying to make him angry. Cell then shoots a one finger blast at Gohan, just like Freeza used to do, and Gohan just barely dodges it. Cell shoots a bunch more, with Gohan barely dodging each time. Gohan avoids one last shot, and then Cell rushes over and grabs onto Gohan, clutching him in a bear hug. Gohan screams in pain, while Cell continues trying to goad him into getting angry. Piccolo protests to Goku, but Goku tells him to just wait a little longer. Piccolo thinks if they wait anymore, Gohan will be killed. But Goku explains that when Gohan gets angry, his true power will be unleashed. That’s the only thing that can defeat Cell.

The others overhear this, and can’t believe Gohan has that kind of power. Cell continues his bear hug, yelling at Gohan to get angry. Piccolo tells Goku he’s mistaken, and asks if Gohan knows about this plan, did they discuss it? “Do you know what Gohan is thinking right now!? It’s not about anger!! ‘Why is my father not helping me while I’m in such pain and dying? Maybe being a fair man, the fight is more important than my life.’ Don’t forget! Even if he’s the number one strongest, he’s still a child!!” Piccolo prepares to go help Gohan, while Goku takes all this in. Goku looks at Gohan once more, and then yells at Kuririn to give him a senzu. Kuririn prepares to, but then Cell drops Gohan. Cell thinks that if Gohan won’t get angry over his own pain, then what about his friends pain… Cell flies over toward them, while Gohan yells to stop. 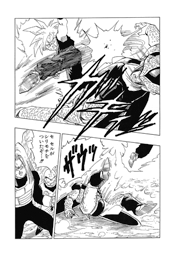 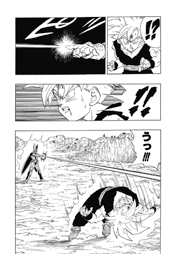 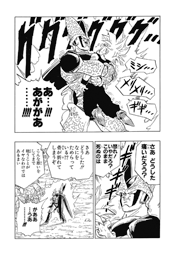