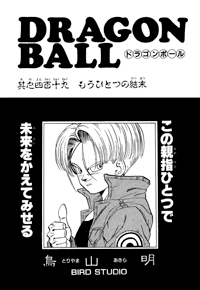 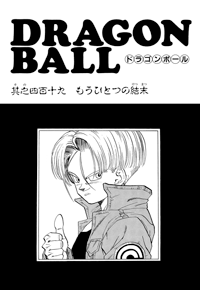 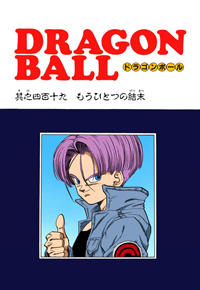 In West City, in Trunks’ future… Trunks returns with his time machine, and tells his mom he’s back. Bulma is glad to see him, and says he’s really grown. He explains about going into the Room of Spirit and Time at God’s Palace, where he got a year’s training in one day. Bulma doesn’t really understand, but says she’s glad to see him come home safely. She asks what happened, and some time passes, and he has explained everything. Goku died after all, but Gohan avenged him. Trunks says his dad really was a cold person, but he did get angry when he was killed by Cell. Bulma is surprised to hear that. Then there’s a news update that the artificial humans are attacking Parsley City. Trunks prepares to leave, telling Bulma it’ll be okay this time. He takes off his jacket, and turns Super Saiyan. She tells him to be careful, and then he heads off.

No. 18 is furiously blowing up all the buildings, and No. 17 is just watching. He says she’s such a kid, all this over losing in a computer game. Then No. 17 gets shot in the face. An old man in an overturned car had shot him. No. 17 says he’s pretty skilled, and then pulls out his own pistol and goes over and shoots the old man in the face. Then Trunks arrives, and says he’s going to finish them today. No. 17 is surprised Trunks is still alive, and No. 18 wants to kill him. No. 17 says to do as she likes. No. 18 fires a blast at him, but Trunks simply swats it away, and then flies over to her, blowing her up with one blast. No. 17 can’t believe he could do that. Trunks says that was for all of his friends they’ve killed. Now this will be for Gohan. He flies over to No. 17 and kicks him in the face, and then blows him up too. Trunks says, “It’s over. …No, not yet. There’s an important one left.”

About three years pass, and the time machine now has enough energy for a round trip, and Trunks is about to depart to inform everyone of the artificial human’s defeat and that the world is also being reconstructed. Then Trunks tells his mom to get away, and says, “I know you’re over there, Cell! You plan to kill me, revert to an egg, and take the time machine into the past to absorb No. 17 and No. 18, right? To reach your perfect form.” Cell comes out from behind the building, shocked he knows all this. “That plan is flawed. And this will end everything!” 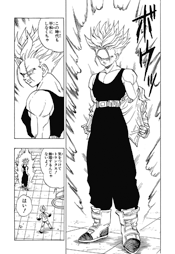 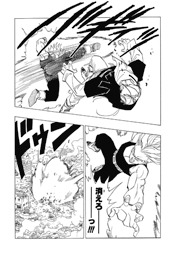 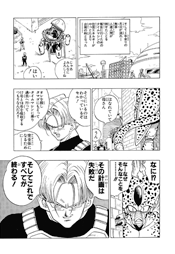