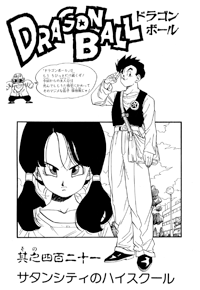 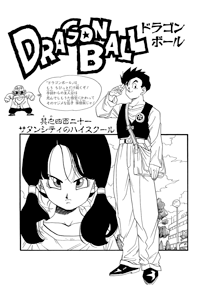 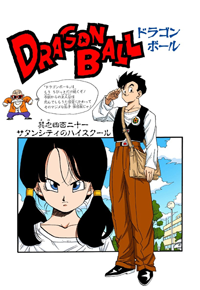 “Thanks to the Son father and son, the Earth has been saved from Cell’s evil grasp. The people were able to return to a peaceful existence. However, just as they were growing used to this peace, the amount of fools began to increase. That’s how humans are. Many years have passed since the battle with Cell… This quiet town is called Satan City. While it’s not the truth, Mister Satan, who was believed to have saved the Earth, resides here, and thus the town’s name was changed.”

A few thugs decide to rob the Satan City Bank and start shooting the place up. Meanwhile, Gohan is flying along on Kinto-Un towards Satan City. Gohan is now 16, and he has being home-schooled up until then. But Chi-Chi set it up so that he could commute to the high school in Satan City, starting today.

Gohan decides to land in the city, saying “bye-bye” to Kinto-Un, and realizes he took a little too long to get here. He starts to run down the street, and stops when he notices the bank robbery. The robbers are having a shoot out with the cops. So, he sighs, takes off his school bag, and transforms into a Super Saiyan, to hide his identity. He goes over and beats up the bank robbers, catching their bullets as they fire at him. He turns over their truck to keep them from getting away, before running off himself, and leaving the rest to the cops. Then, with black hair again, Gohan picks up his school bag, and a girl with her hair in two ponytails suddenly comes up to him from behind, and wonders who did all that. Gohan says he didn’t see. The girl cracks her knuckles, disappointed she was too late to join in, as Gohan sneaks off.

An older gentleman tells the girl, calling her Videl-sama, that it was the Golden Warrior again. He tells of what a great job the Golden Warrior did, and says he was wearing the same school badge she’s wearing. (A little star badge pinned to her shirt, Gohan had one on his vest.) At Orange Star High School… In class, set up more like a college classroom, Videl asks a guy with long blonde hair, Shapner, if he’s the Golden Warrior, but Shapner denies it. A blonde girl wonders if the Golden Warrior is stronger than Videl’s papa, but a nerdy kid says there’s no way, Videl’s papa is the world champion who saved the Earth, Mister Satan. Then the teacher walks into the classroom, and says they have a new student. Gohan comes in and nervously introduces himself, and the blonde girl thinks he’s cute, just her type. Videl thinks he looks familiar, and Shapner laughs that he’s probably the obedient bookworm type. The teacher tells him to have a seat, so Gohan looks around, and the blonde girl calls him over to sit by her. She introduces herself as Erasa, and then the girl over here is Videl, and her papa is Mister Satan. Gohan is shocked! 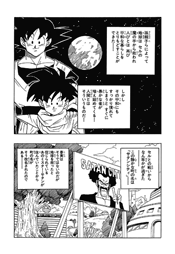 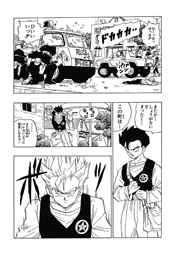 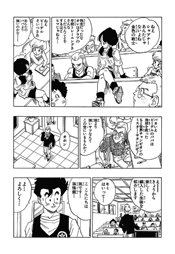