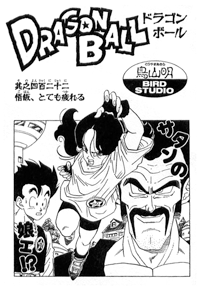 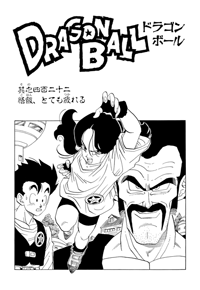 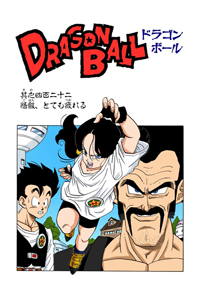 Gohan is shocked she’s Mister Satan’s daughter, and Erasa says that if not for Videl’s papa, none of them would be alive. Then Videl recognizes him as being at the bank robbery this morning. Erasa asks if the Golden Warrior was there, and Gohan asks who that is. Erasa explains that he’s a warrior of justice who’s appeared about three times in the past ten days. He’s an incredibly strong boy and he has gold hair, very famous in this town. Gohan realizes that’s him. Videl says an eyewitness said the Golden Warrior was wearing this school’s badge, white shirt, black vest, just like Gohan… The teacher says to get quiet. Shapner says Gohan doesn’t look like a warrior at all, and he doesn’t have blond hair, either. Erasa agrees he looks weak. Videl then thinks to herself, remembering that when Papa fought Cell, on the video there was a group of people who could change their hair to gold. But Papa said it was just a lame trick…

Erasa asks Gohan if he commutes, or if he has an apartment in the city. Gohan says commuting from home, and she asks where that is. Small village in East 439 District. Erasa freaks out, since that’s over 1000 kilometers away. The teacher says to get quiet again. She quietly asks how he gets here, it’d be at least five hours with a “jetflyer”. Gohan nervously says that’s why it takes him so long. Later on, in gym class, the coach says they’ll be playing baseball today. Shapner asks Gohan if he knows anything about baseball. Gohan says he’s never played, but he knows the rules. Shapner says he’s a “genuine countryman kinda guy”. Videl tells Gohan to defend the right. Gohan thinks he’ll have to ease up, because his mom, Bulma, and everyone said it would cause a fuss if anyone knew who he really was.

Shapner goes up to bat, while Videl is the pitcher. She throws the ball and he hits it way out. Gohan, in the outfield, jumps way up into the air to catch it, freaking everyone out. Gohan thinks he’ll throw it to third to get an out. He tries softly, but the third baseman falls over when he catches it. That’s three outs, and Gohan and Videl’s team is up to bat. The coach thinks that was an eight meter jump, but Gohan insists it was luck. Eventually, Gohan is up to bat, and gets a little questioning from the coach about his grip. Shapner is the pitcher, and he thinks he’ll scare Gohan a little. Gohan thinks he definitely can’t hit it. Shapner throws it really hard, and hits Gohan right in the face. Gohan asks if that’s a “dead ball”, and gets to walk. Shapner wonders what’s up with him, while Videl is really starting to become suspicious.

After school, Shapner asks Gohan if he’ll join any clubs, suggesting boxing since he’s so tough, but Gohan says no. Erasa says he can’t because he has to travel so far, and asks Gohan if he’ll drive her home on the way. Gohan tells her his car only seats one person. Gohan then walks down the street in the city, and Videl is following him, wondering why he isn’t using a car or jetflyer for his long journey. Gohan knows this, and turns a corner to lose her. Videl rushes around the corner, but Gohan is gone (he’s up on the roof of a building now). Now on Kinto-Un heading home, Gohan thinks the city is exhausting. Then he decides he needs a scheme to hide his identity because of this Golden Warrior business. He’ll ask Bulma. 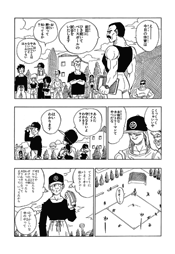 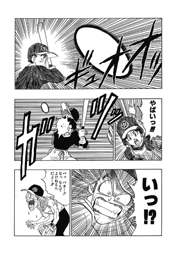 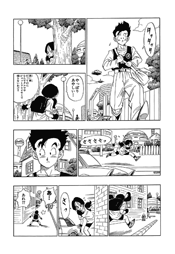