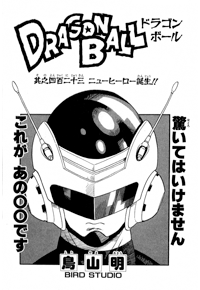 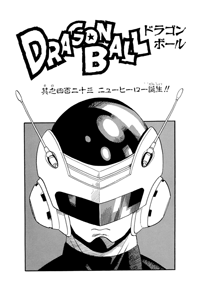 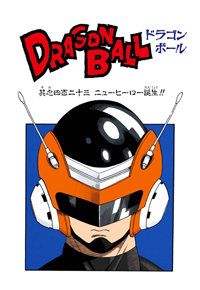 The Birth of a New Hero!!

Bulma, now with really short hair, confirms that Gohan is asking for a complete transformation to hide his identity. Gohan asks if she can do it, and Bulma says of course; she’s a genius after all. She’ll make an equippable transformation suit that turns into a capsule, and it’ll be about two hours until she’s done. He thanks her, and then asks where Trunks is. Probably in the gravity room with Vegeta. He’s at a good age to start training and learning fighting techniques, and he wants to become stronger than Gohan. Gohan bumps into Dr. Brief along the way, chatting about high school a bit. Then he bumps into Trunks, who’s all sweaty from working out. Vegeta shows up, saying Gohan looks weak, and he needs to keep practicing even in these peaceful times. Vegeta then walks off, and Trunks wants to go play.

Some time passes, and Bulma’s all finished. She’s incorporated it all into a watch, and by pressing the red switch it will transform the wearer. Gohan has a helmet and a cape, just like a superhero. Gohan thinks he looks pretty cool, but Trunks doesn’t think so… Gohan thanks Bulma, and flies home on Kinto-Un. On the way Gohan realizes that if he travels to school while transformed, he can fly, which is faster than Kinto-Un. He transforms, and he really is much faster than Kinto-Un. He flies over Satan City and spots a wild car. He lands in the road, right in front of the car. The car screeches to a halt, and the driver yells at Gohan. But Gohan says, “I cannot allow such reckless driving!! A person could get run over!! Promise me that from now on, when driving within the city, you’ll drive safely!!” The driver and passenger get out, super upset now (one has a gun, and the other has a knife), and they wonder who the hell this weirdo is. Gohan has to think about that for a minute.

With a silly sentai-style pose, he introduces himself as a lover of justice: Great Saiyaman! The bad guys make fun of him, and Gohan stomps the ground in anger, busting through the pavement. He put a lot of thought into that name, and they apologize, saying it’s a cool name. Then they head off, saying they’ll practice safe driving from now on.

“And so, this was how rumors of the new hero, Great Saiyaman, quickly spread throughout Satan City.” 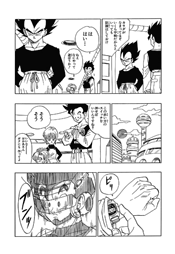 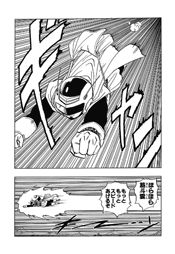 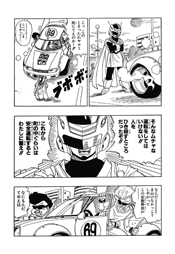