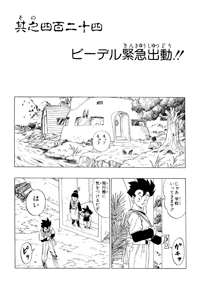 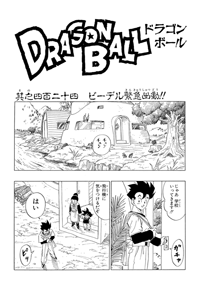 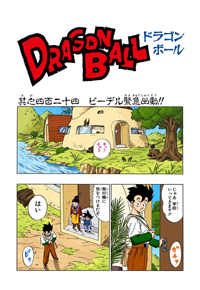 At the Son house, Gohan is leaving for school, and Chi-Chi says to watch out for planes. She’s holding the hand of a little boy who looks just like Goku, who thinks his big brother looks cool in disguise. Great Saiyaman says he’ll have Bulma make one for him, too, and that he can use Kinto-Un from now on.

“The name of this little brother of Gohan’s, who looks just like Goku, is Goten. He is the second child that Goku left behind before the battle with Cell.”

Gohan, meanwhile, arrives at school, landing on the roof and putting his disguise away. In the hallway, a kid asks if he’d heard that yesterday a new friend of justice arrived in town, and it wasn’t the Golden Warrior. The kid says he had goofy clothes, but he was very strong. Great Tireman or something. Gohan corrects him, saying he heard the name from a direct witness.

In class, Videl’s watch starts beeping. Apparently there was a robbery in Ransel Town, and the robbers are presently speeding down Route 81 toward the mountains. Videl tells the teacher she has to leave, and heads out. Erasa explains that Videl has a hobby as a friend of justice. She’s the daughter of Mister Satan, who saved the world, and the police ask for her help since she’s strong. Shapner says she’s much stronger than himself, and her strength rivals Mister Satan’s. Hearing that, Gohan realizes she’s in trouble. Shapner says this little city is blessed with three friends of justice, between the Great Whatever, the Golden Warrior, and Videl, as Gohan worries about Videl. Then Gohan suddenly blurts out a bathroom request, and rushes through the halls, up to the roof.

As Great Saiyaman, Gohan realizes he doesn’t know where Route 81 is, so he sits on top of a building until he can feel Videl’s ki. The robbers are being chased down the highway by two cop cars, and then fire a rocket launcher backward to blow both cars up. However, Videl’s plane lands on the road in front of them. She holds up some handcuffs, and tells them to throw down their weapons and come quietly. The big robber thinks that’s funny, but the little one recognizes her as Mister Satan’s daughter. The big one thinks this is interesting, and wants to fight her. He goes after her, but she jumps over him and kicks him in the face. Great Saiyaman feels her ki now. The big one gets up and swings at her, but misses, and Videl gives him a hard uppercut. He gets back up again, though, just as Great Saiyaman arrives (unnoticed). He thinks Videl really is strong, moreso than Mister Satan. She hits the guy a few more times, and he doesn’t get up. The little guy then gets mad and pulls out a gun, but Great Saiyaman steps in and knocks the gun away. Then he crushes the gun, and the guy freaks out, asking who he is. Great Saiyaman says he’ll tell him, on the next page. 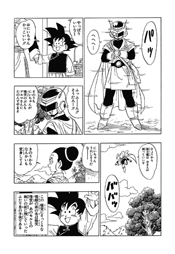 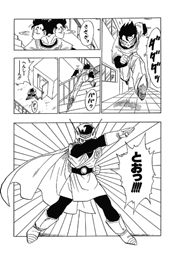 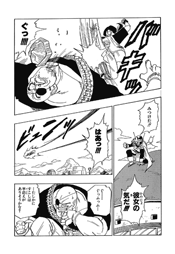