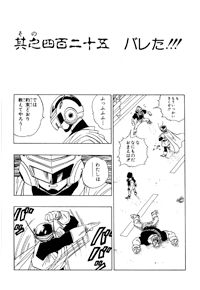 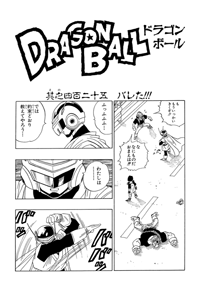 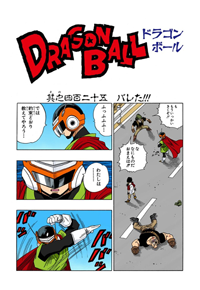 The guy asks him again, and Great Saiyaman says he’ll tell him now, as promised. “I…” Posing. “Absolutely cannot forgive evil. A friend of justice!!” More posing. “I am the Great Saiyaman!!!!” (He practiced all of that for two hours last night.) Videl thinks that’s very lame. Great Saiyaman tells the guy resistance is futile (seriously), and tells Videl to cuff him. Videl notices that Great Saiyaman knows her name… The guy decides to throw a smoke bomb and try to escape in his car, but Great Saiyaman says such smoke could not deceive his eyes, and vows not to let him escape. Videl freaks out that he can fly, and it’s no trick. Great Saiyaman catches up to him, of course, and bops him on the head, then brings him back to Videl.

Great Saiyaman asks about taking the criminals to the police, but then Videl suddenly says his identity must be a secret. Great Saiyaman admits that it is… “But, Son Gohan-kun, how did you get out of class?” Great Saiyaman explains that he said he had to go to the restroom. “Aha!!!! I knew it, your true identity was Son Gohan-kun!!!” After the shock, Great Saiyaman disappointedly asks how she knew. His voice, and he knew her name. So, the two of them fly back to school in Videl’s plane, and she asks why he dressed like that. He explains that his friends wanted to live normally, and thus he should hide his strength. Videl wonders if he’s the Golden Warrior, too, but Gohan insists he isn’t (that one must remain secret).

Videl then begins to ask him if he’s entering the Tenka’ichi Budōkai next month, and Gohan wonders about it. She explains that it’s a tournament to decide the fighting champion, and it’s being revived after quite a long time. “My papa was the champion of the previous tournament. Before that, I don’t know what he looks like, but he was a mysterious man named ‘Son Goku’…” Gohan starts to get nervous. Videl figures this ‘Son Goku’ must be Gohan’s papa, and Gohan doesn’t deny it. She insists that he should enter the Tenka’ichi Budōkai, because it would be interesting with the children of the previous two champions fighting. Gohan doesn’t want to, but Videl threatens to tell everyone he’s the Great Saiyaman, so Gohan reluctantly agrees. When they arrive back at the school, Videl drops him off on the roof, and she asks if he’ll teach her to fly, too. Gohan changes his clothes, and heads back to class. A kid yells at him that he must’ve had to take a huge dump, and Gohan is really embarrassed. 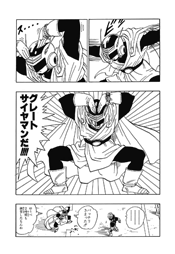 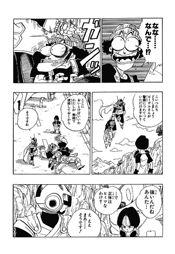 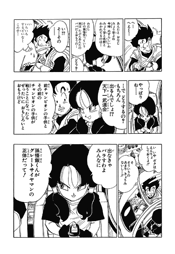