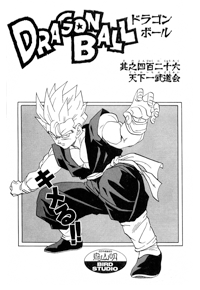 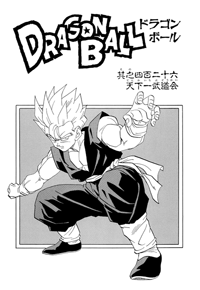 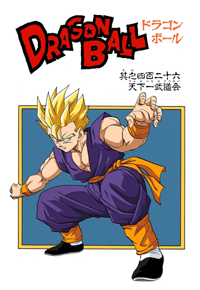 Back at Capsule Corp., Gohan tells Bulma that he’s going to enter the Tenka’ichi Budōkai because one of his classmates is Mister Satan’s daughter… Bulma recognizes Mister Satan as the world fighting champion, who got in the way during the battle with Cell. Gohan says she’s not very good, but she found out his identity. Nevertheless, helmets or protectors are not allowed at the Tenka’ichi Budōkai, so he needs something else. Bulma has a solution, and gives him a bandanna and sunglasses. Gohan is amazed at how easy that was and asks Trunks what he thinks, but Trunks says “No comment…” (in English). Bulma figures Gohan would easily win, but Vegeta thinks otherwise. He insists that if Gohan enters, he’ll be entering too. He says there used to be a great difference in power between them, but how about now? Gohan has been relaxing during this peaceful time, while he’s continued his training. Bulma starts complaining that Vegeta has no job, and neither did Goku, so it must be a Saiyan thing. Trunks thinks it would be awesome for his father and Gohan to fight, and then a very familiar voice says, “I’ll enter too!!”

Gohan recognizes it as his father’s voice. “That’s right! Been a while, guys.” Gohan asks how he’s been, and Goku says he’s as well as someone can be while they’re dead, as he’s talks to them via Kaiō. Gohan asks if he can really come, and Goku says yeah. He’s asked Uranai Baba to let the one day he can return to the living be the day of the Budōkai. Gohan is very happy, Vegeta thinks it’ll be interesting, and Trunks is confused. Bulma tells Gohan to hurry along and tell his mom, Goten, Kuririn, and everyone else the big news. Before he leaves, Gohan tells Vegeta he should wear a costume like this, to hide his identity, but Vegeta is quite reluctant.

His first stop is at Kame House, and Kuririn is very surprised to hear the news. Gohan points out to the reader that since Kuririn stopped fighting, he also stopped shaving his head like a monk. Kame-Sen’nin, No. 18, and a little blonde girl are there, too. Kuririn doubts he could win if Goku, Gohan, and Vegeta are all entering, but Gohan says there will be prizes up to fifth place. No. 18 asks how much they could win. The winner gets 10,000,000 Zenny, second place gets 5,000,000, third gets 3,000,000, fourth gets 2,000,000, and fifth gets 1,000,000. No. 18 tells Kuririn he’ll be competing, along with herself. Kuririn asks Gohan not to tell Piccolo about this so he can surely get fifth place, but Gohan can’t do that. Kuririn then asks about Gohan’s goofy outfit, but Gohan says he has no fashion sense, insisting it’s cool.

Next stop, God’s Palace. Piccolo thinks it should be interesting and says he’ll enter, but Dende won’t because he’s not a Fighting-Type Namekian. Piccolo asks about Gohan’s strange clothes, too, but Gohan tells him they’re cool. Gohan flies off, thinking that he doesn’t know where Tenshinhan and Chiaotzu are, and Bulma will contact Yamcha. He figures his mother will be happy to see father, even if only for one day, and this will be Goten’s first time seeing him. But he doubts his mother will even let him enter. He’d have to take time off from school to train… But that night at dinner, Chi-Chi gets so excited to hear about Goku returning, and worries that she’s aged so much. Gohan says he wants to enter, too, talking about the prize money. Chi-Chi then insists he participate, because he and Goku could get first and second for 15,000,000 Zenny. She doesn’t even care if he takes time off from school for training. Chi-Chi thinks this is a blessing from the heavens, as very little is left of her dad’s fortune. Gohan asks Goten to help him train tomorrow, and Goten says okay. So, the next day, Gohan turns Super Saiyan to start his new training. 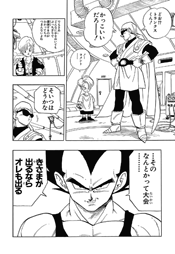 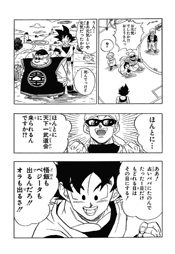 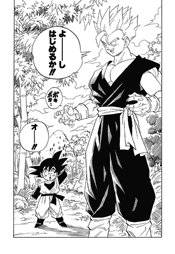