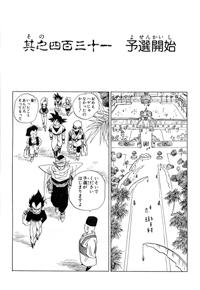 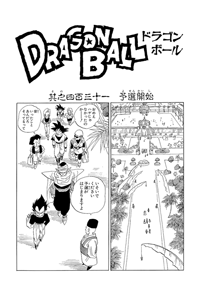 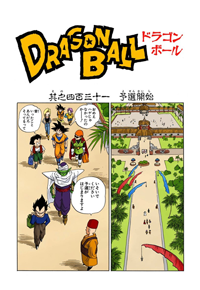 As they head towards the preliminaries, Goku notices that Kuririn isn’t bald. Trunks tells Goten he really does look like his dad, but doesn’t think he looks as strong compared to his own dad. Goten says that Gohan told him their father is the strongest in the universe. Then Goku notices that No. 18 is here too, and Kuririn tells him that they live together at Muten Rōshi’s house, and have a kid. Goku is shocked, and wonders how robots can have kids. “She’s not a robot. She’s just a human who was modified a bit.” As they approach the arena the interview lady and her cameraman notice the group coming their way. She first tries talking to Vegeta and Piccolo, but they simply ignore her. She thinks they looked familiar, though. Goku, however, says that he came from “That World” and explains that his halo is not an accessory, you get it when you die. Piccolo decides to telekinetically destroy the camera before Goku says too much more, and the interviewer scolds the cameraman for breaking the camera.

A Budōkai attendant leads them inside, pointing out the changing room if they need it. Kuririn, Trunks, and Vegeta all go in to change, with Kuririn saying the only people who’ll put up a decent fight are their friends. A man thinks Piccolo doesn’t look okay, because of his complexion. When everyone is together again, they head out for the preliminaries and bump into the announcer. The announcer is very happy to see Goku and Kuririn, and says he knows it wasn’t really Mister Satan who defeated Cell. He thinks the Budōkai will be much better with them participating, and tells Piccolo not to destroy the entire arena like last time. Then the announcer asks about the ring above Goku’s head. “Ah, I’m dead. I died during the battle with Cell. Today I’ve specially come back from That World.” The announcer thinks that’s not too weird, for them, and then heads off.

The preliminaries are starting, and not including the Youth Division there are 194 people here, but only sixteen can participate. Mister Satan will participate automatically, since he is the reigning champion, but they’ll now pick the remaining fifteen using a punch machine. The fifteen highest scores will pass. Mister Satan will demonstrate the punch machine, saying no one can do better than him (Kuririn smugly says otherwise). Piccolo again telekinetically destroys all the cameras, and says he did it for Gohan’s sake. Gohan is very grateful, while everyone else is completely confused. Gohan goes off to search for a friend, just as Mister Satan prepares to use the punch machine (now disappointed the world won’t see).

Satan psyches himself up, and then punches the machine, getting a score of 137. He encourages the other fighters and then heads inside, exhausted. The attendants tell everyone to line up at the punch machine, while the kids need to come this way. Goku wonders where Tenshinhan and Chiaotzu are, and Kuririn says something about how they said “we’ll probably never meet again”. Some people go through the line, and finally it’s #84’s turn: No. 18. Kuririn tells her to go lightly and not break the machine. No. 18 nonchalantly punches it, and scores 774. They think the machine is malfunctioning, and Kuririn scolds her as they “fix” it. Her second score is more acceptable with a 203. #85, Kuririn, gets 192. #86, Goku, gets 186. #87, Piccolo, gets 210. The attendant thinks it must really be broken, but then Vegeta destroys the machine with his punch, leaving everyone absolutely stunned. 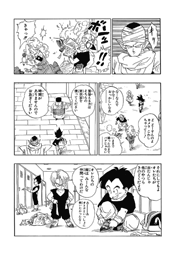 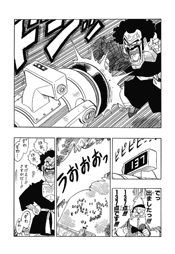 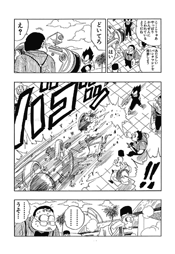