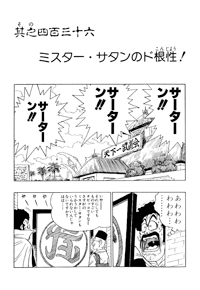 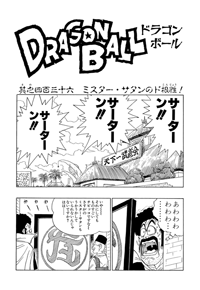 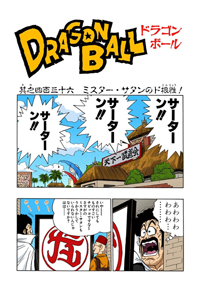 Mister Satan’s Got Some Guts!

The crowd is chanting “SATAN”, but Satan is scared to go out to the ring, thinking he’ll die. The announcer asks Trunks if he needs a break, but he says he’s fine, so he calls out Mister Satan. Satan then comes out, posing for the crowd like usual, but wonders what he’ll do. Trunks thinks about this guy being the world champion, but he doesn’t look stronger than his dad at all. Goten yells, “Do your best, Trunks-kun!!”, but Satan tells him to stay out of this. Kuririn thinks they should all head back now, but Videl protests, since they seem to know that kid, and he’s facing Mister Satan. Gohan then nervously says it should be a great match, but everyone else obviously think otherwise and leaves him and Videl behind.

Satan takes off his cape and championship belt, and starts to warm up. The crowd cheers, but Trunks thinks that didn’t look amazing at all. Trunks starts stretching too, but Satan tells him to stop, this is a light fight for fun. Trunks insists he’ll go all out. Satan yells at him to not be so childish, and Trunks says “I am a child.” The announcer assumes they’re ready, and calls for the fight to begin. Satan then says his knee hurts, an old injury he got while fighting Cell that he’s kept secret. The announcer says he’ll call the doctor, and Satan miraculously recovers. Not only that, but he gets an idea. He explains to Trunks about the attraction fight’s special greeting, a very light punch to the face.

Satan explains to the announcer that the kid wanted his autograph, and now the match will really begin. Satan then leans forward, smiling, and Trunks punches him in the face lightly. Lightly enough to send him crashing out of the ring and into the back wall, though. Videl is completely shocked, while Gohan is pissed Trunks punched so hard. Satan gets up, all tattered and bruised, and smiles, saying that kid was so strong. The crowd cheers, thinking how nice it was to let the kid win, while Trunks is just confused. Satan goes back inside and once he’s alone, he cries about the extreme pain he’s in. 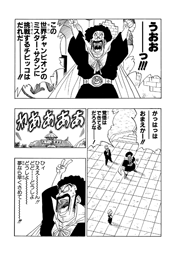 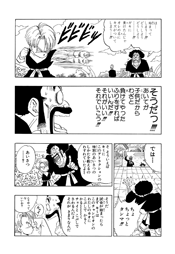 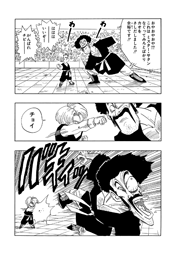