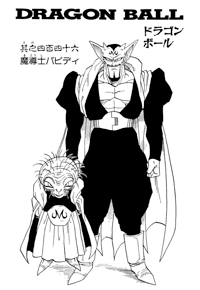 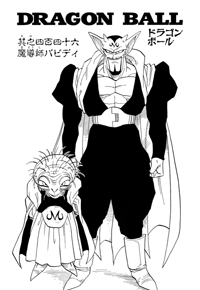 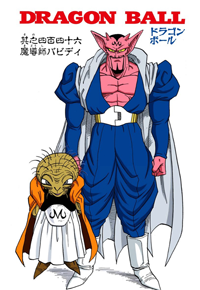 Goku figures he intends to revive Majin Boo, and Kaiōshin says yes, that’s why they must defeat the Mage Bobbidi. Goku asks if he’s strong. Kaiōshin says he should be much like his father, with formidable magic, but not much physical strength. He was able to take advantage of the evil hearts of Yamu and Spopovitch and take control of them. They should be okay as long as he doesn’t take control of any strong humans… Meanwhile, Gohan asks Kibito what Yamu and Spopovitch had wanted with him at the Budōkai. After such a long time, to revive the sealed up Majin Boo, they need huge, clean energy. Those two were sent to the Budōkai to gather that energy. Now they’re following these two to find out where Bobbidi has moved to. Back with the others, Goku asks Kaiōshin why he didn’t dig up this Majin Boo when he beat up Bobbidi’s father. He says it was unavoidable, and if they’d disturbed him slightly, the seal could’ve been been released. Plus, Majin Boo’s ball was in a place where the humans, who were just beginning to walk on two feet, couldn’t have gone, so it seemed safe.

Kibito thinks they should speed up to catch up to the others, but Videl says she’s going too fast as it is. Gohan says she should go back, and she actually agrees. He tells her to tell Goten and his mom everything when she gets back to the Budōkai, and she asks if he really was the Golden Warrior. Gohan apologizes for lying, but he didn’t want anyone to know. Videl also asks if he and his friends were the ones during the battle against Cell seven years ago. The child who was with them must’ve been Gohan. She also figures it was them, not her Papa, that defeated Cell. Gohan doesn’t really confirm it, but she’d thought it a bit weird that Papa beat Cell. Videl wishes him luck, and tells him to beat this Mage Bobbidi. She stops, and he and Kibito speed up. Videl floats mid-air after they’re gone, and thinks, “Don’t die, Gohan-kun. If you come back safely, I want to date you!”

Yamu and Spopovitch are well on their way, as Kibito and Gohan catch up to the other group. The two start to land, and Kibito says they had already searched this area. Kaiōshin and the others hide on an overlooking mountain and suppress their ki, as they watch closely. There is a small, round structure, and an alien guy standing outside talking to Yamu and Spopovitch. Kaiōshin says that’s not Bobbidi. Someone thinks the ground looks dug up, and Kibito realizes that Bobbidi hid his ship underground. Kaiōshin then realizes that Bobbidi purposely hid it because he knew they were coming. Piccolo thinks they should hurry up and attack before they revive Majin Boo with that stolen energy. Kaiōshin says they’ll all have come out so that Majin Boo’s revival doesn’t destroy the ship, so they’ll just have to watch a little longer. The alien guy goes back in, and two more people come out. A tall, demonic-looking guy, and a small wrinkly guy who’s floating. 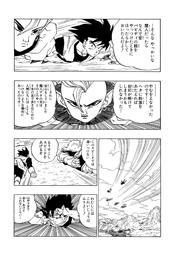 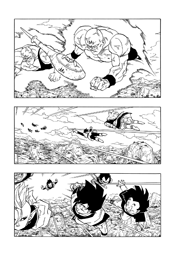 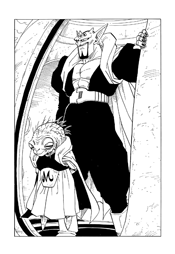