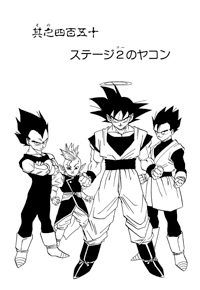 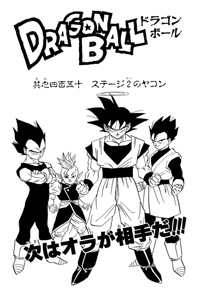 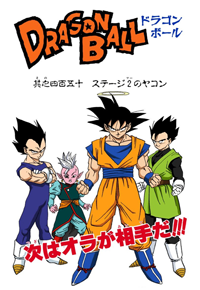 Dabra asks who he wants fighting on Stage Two and Bobbidi tells him Yakon, since it seems they can’t fool around with these Earthlings. Dabra is worried that he’ll never get to have any fun if they send Yakon out, but Bobbidi lectures him that awakening Majin Boo from his long sleep is much more important than fun. Goku is getting impatient, while Vegeta contemplates just destroying the floor, but Kaiōshin insists he mustn’t, lest he disturb Majin Boo. Vegeta thinks this Majin Boo is probably nothing special, just like Dabra. Goku agrees, thinking Dabra is probably about as strong as Cell was seven years ago. Kaiōshin can’t believe the power of these Super Saiyans.

Goku says to come on and hurry up, but just then the door in front of him opens and his opponent steps out. Yakon is a big frog-like monster, and wants to know who he’ll be eating first. Goku says he’s his opponent. Kaiōshin recognizes the beast Yakon, but before he can say anything Yakon punches at Goku, with Goku just barely jumping out of the way. Yakon then swipes at him with one of his claws, and manages to slash Goku’s outer shirt. Gohan notes that he’s not only huge, but fast too, and reassures Kaiōshin that his father can handle this alone.

Bobbidi praises Yakon, and tells him to hurry up and finish this and take their energy. To end things quickly, he’ll send them to Yakon’s beloved pitch-dark world, the Planet of Darkness. Dabra thinks that’s unnecessary, but Bobbidi says he doesn’t want the ship to take a great shock, and accidentally have Majin Boo be revived at less than full power. So, “Papparapa!!!” The room is now pitch black, and Goku can’t see a thing, but Yakon can. Yakon swipes his large claws at Goku, but Goku dodges and then kicks Yakon in the face. Yakon is shocked, but Goku says he can sense his movements even in total darkness, because of the flow of air and his energy. Although, he does have a method of seeing him, and so he turns Super Saiyan, illuminating the entire surrounding area. Bobbidi and Dabra wonder what this is. 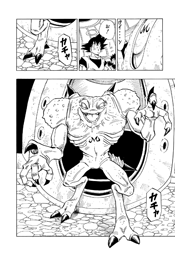 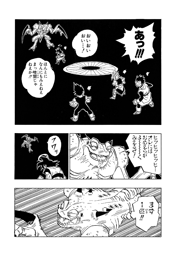 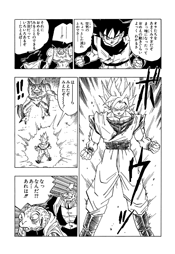