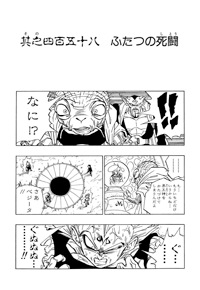 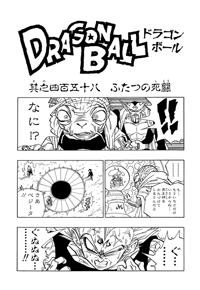 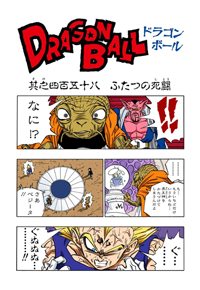 Bobbidi is shocked and tries again, but Vegeta still refuses. “Like I said… I only want to fight Kakarrot… I am a pride-filled Saiyan prince… You think you’ve taken me as your servant…!!! Even if you control my body and mind, my pride alone is not as you thought!!!” Bobbidi thinks someone so full of pride is a first, but Dabra assures him that Vegeta’s only purpose was to take energy. If Kaiōshin should make it to them, Dabra will kill him. Kaiōshin can’t believe that Vegeta was able to defy Bobbidi like that. Goku hadn’t realized Vegeta wanted to settle the score that much. Dabra suggests that Bobbidi open the door for Kaiōshin, so that they won’t risk Majin Boo being revived at less than full strength.

They prepare to hop down the hole, but first, Goku gives Gohan one of the two remaining senzu, and tells him to eat it now. Goku also tells him to get angry like he had when fighting Cell, as it will bring out the depths of his power. If he does that, there’s no one he can lose to. Gohan is sorry this all had to happen on his one day here, as he and Kaiōshin hop down the hole. The floor panel to the next floor is open as well, and they continue down until they reach the bottom. They arrive in the room with Majin Boo’s ball, where Bobbidi and Dabra are waiting. Kaiōshin and Bobbidi snidely greet each other, and he tells Gohan he’ll fight Bobbidi.

Goku and Vegeta stare each other down. Goku says he doesn’t want his damage to be received by Majin Boo as energy, so he’s going to end this at his highest power. Vegeta is curious to see the fruits of his training in the Heavenly Realm. Goku then powers up, with electricity flying all around his body, and Vegeta says he’s even stronger than Gohan was “back then” before powering up himself. Goku thinks he needs to end this soon. Vegeta says he’ll kill him, as he throws a hard kick that Goku barely blocks. Vegeta pulls back, and then throws a punch that Goku catches. Goku throws his own punch with his free hand, which Vegeta catches with his free hand. They attempt to knee each other, until Vegeta head butts Goku and knocks him away. Goku recovers, and then kicks Vegeta, sending him crashing into the ground. Vegeta comes back from the impact, and the two of them smirk at each other. 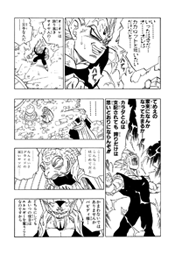 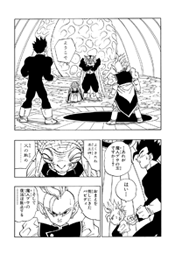 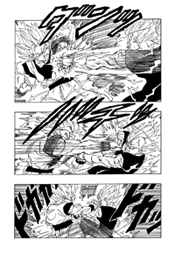