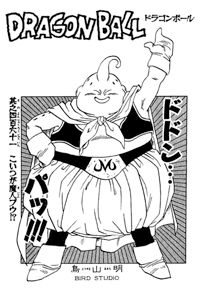 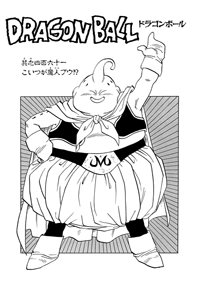 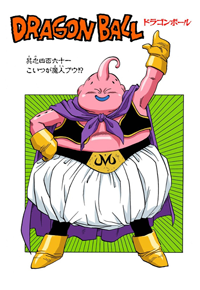 This is Majin Boo?!

Boo stands there smiling as everyone watches on. Dabra asks if this is really Majin Boo, but Bobbidi says Kaiōshin is the only one who’s seen him before. Kaiōshin says he’d never forget such a terrifying face. Boo continues smiling, and begins stretching. Gohan had thought a majin would be bigger, and Kaiōshin says there’s no running away now. Gohan thinks Boo certainly has an incredible ki, but it doesn’t seem like he’ll do anything. Meanwhile, Goku and Vegeta are both catching their breath. Vegeta prepares to attack again, but Goku tells him to hold up, a huge ki has appeared, probably Majin Boo.

Vegeta stops, and then laughs. He thinks this Majin Boo’s Battle Power isn’t anything to be concerned about, just as he thought. He and Kakarrot have become too strong. Vegeta had never thought Kaiōshin was that great either, so something that’s terrifying to him is nothing to them. Goku doesn’t think so though, saying that Boo’s ki seems abnormal. Vegeta gets pissed and says he won’t let him run away from their fight. Meanwhile, Bobbidi introduces himself to Boo, he’s the son of his creator, Bibbidi. He’s revived him from his ball, and now he’s his master. Boo “hmph”s, crosses his arms, and turns away. Bobbidi scolds him, but Boo ignores him. Then, Boo suddenly looks at Bobbidi and sticks his tongue out, scaring the hell out of Bobbidi. Boo laughs about this, and Dabra thinks he’s just an idiot.

Bobbidi thinks Boo came out flawed somehow, with no brains or power. Boo looks at Dabra, and then dances around with his fists in the air. Dabra smirks and thinks he’s stupid if he wants to fight him. Gohan thinks Boo is flawed, but Kaiōshin says he’s not flawed at all. Boo has tiny holes in his head, and he starts to shoot steam out from them, making an evil grin now. Boo then gouges Dabra’s eyes out, and kicks Dabra into a nearby mountain. Boo then dances, and claps with a happy smile. Bobbidi is impressed, now. 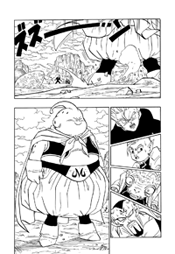 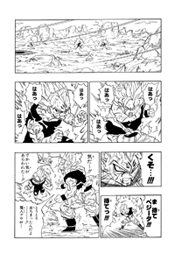 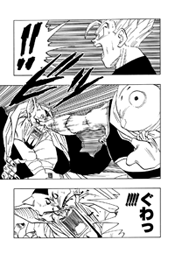