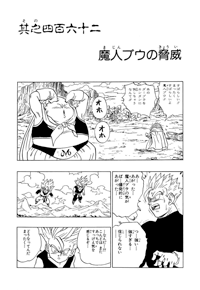 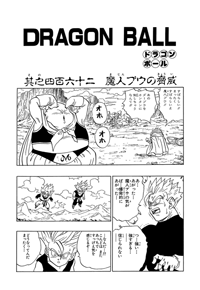 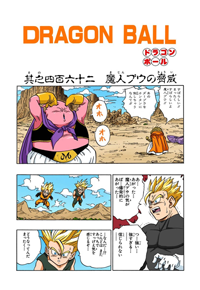 Bobbidi compliments Boo as he dances around, and Gohan can’t believe Boo’s power, how it explosively grew in just a moment. Meanwhile, Trunks says he felt an awesome ki, and wonders what happened. Goten wonders which way they should go, and Trunks thinks they should head toward the creepy ki, which is probably the majin. So, they zoom off. Goku notes that Majin Boo’s ki has gotten incredible, and it’s their fault he’s been awakened. Vegeta knows, but it doesn’t concern their fight. Goku tells him everyone will be killed, even Bulma and Trunks. “Shut up… Shut up, shut up!!! I sold my soul to Bobbidi so that I could get rid of that softness!!! I don’t care what happens to anyone!!!” But Goku knows he hasn’t completely sold his soul.

Vegeta hesitates, but then decides to concede. He knows that Goku hasn’t really concentrating on the fight ever since he noticed Majin Boo, anyway. Vegeta then asks for a senzu. Goku thinks they can definitely beat Majin Boo if they fight together, as he pulls the senzu pouch out. Vegeta then hits Goku on the back of the neck, knocking him out. Vegeta picks up the senzu and eats one, and says he was the one who brought out Majin Boo, so he’ll be the one to take care of him. He’ll finish this fight later, if he’s still alive.

Bobbidi tells Boo to obey him. If he doesn’t, well, he’s studied Papa’s notes, and knows the spell to seal him in the ball. Boo then starts paying more attention, and Bobbidi says that’s better. Gohan thinks that Boo seems very childlike, so he wouldn’t be so bad if they defeated Bobbidi. Kaiōshin says without Bobbidi, there’s no way to seal Majin Boo up. He insists that Boo really is a fierce monster in spite of how he looks, and the time will come when Bobbidi will need to seal him in the ball, so they should wait until then. Kaiōshin had thought that he could defeat Bobbidi and prevent Boo’s revival. Had he known that these mortals held such greater power than he, he could’ve done it “that way”. Gohan wonders what “that way” is, but Kaiōshin says it’s too late now, since they’re pretty much dead and can’t even run away.

Bobbidi’s first order for Boo is to kill those two, and so Gohan grabs Kaiōshin and flies off, saying he’s confident in his own speed. Boo watches them and then zooms off in an instant, appearing ahead of them. Boo smacks Gohan off into a nearby mountain, and then Kaiōshin attempts to blow Boo back with a telekinetic technique. But Boo is barely affected, and he claps his hands together, smashing Kaiōshin’s face, and then pounds him into the ground. Gohan starts to get up from the rubble, and Bobbidi is just loving this. 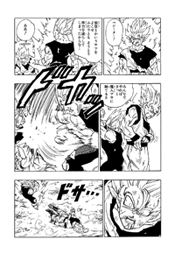 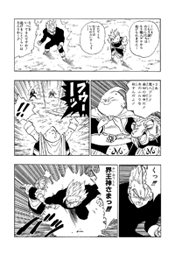 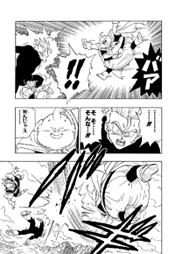