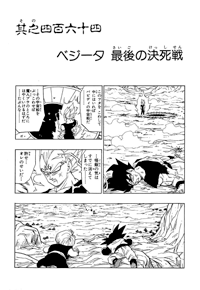 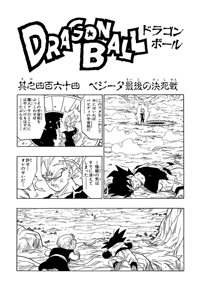 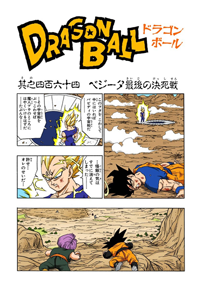 Vegeta is standing over the floor panel, and thinks if he destroys this, he can get in Bobbidi’s spaceship. And if he destroys the spaceship, he could quickly find Majin Boo’s location. He says Gohan’s ki has already vanished, and takes the blame for it. Meanwhile, Trunks and Goten are watching on as Boo dances around saying he’s going to eat Dabra. Dabra prepares to attack Boo, but Boo bends forward, says, “Turn into a cookie!”, and shoots a magical beam at Dabra. What’s left is a large Dabra-shaped cookie, which Boo picks up and eats whole. Trunks and Goten are shocked, and Kuririn suddenly returns to normal. He wonders how the boys are here, and Trunks says he had just been stone.

Kuririn remembers that the horned guy spat on him, and Goten thinks it must’ve been the guy who was just eaten. Trunks figures Kuririn returned to normal since he died, and then Trunks runs off. Kuririn asks why, and Goten says Trunks broke the Piccolo figure. Trunks freaks out that Piccolo is still in pieces, although not stone now. Trunks goes back to the others and wants to keep this a secret, but then Piccolo asks, “Keep what a secret?” Piccolo then ducks as he feels a terrifying ki, realizing it must be Majin Boo. Trunks asks him how he returned to normal, and Piccolo explains that he can regenerate so long as his head is undamaged. Piccolo wants to know what’s going on, but the boys don’t really know either. Kuririn starts to get really scared of Boo.

Bobbidi tells Boo to eat Kaiōshin also, and Piccolo is shocked to see Kaiōshin on the ground all weakened like that. Kuririn tells Piccolo to calm down, as there’s nothing even he can do to stand up to someone like that. Boo wonders what he’ll turn Kaiōshin into, maybe chocolate, maybe jelly. But before Boo can do anything, there’s suddenly an explosion in the background. Vegeta has blown up Bobbidi’s ship, with the explosion shooting up through the ground (since the ship had been underground). Bobbidi wonders what happened, until Vegeta emerges from the smoke. Trunks is happy to see him, but Bobbidi is livid. Vegeta thinks this unconventional and stupid-looking guy must be Majin Boo, and he’s still mad he killed Gohan. Piccolo is shocked to hear this. Boo wonders what ‘unconvential’ means, and Bobbidi says basically he has a weird face.

Boo is angry now, and shoots steam out of his head. He says he’s gonna kill Vegeta, and Bobbidi tells him to go ahead. Kuririn notices that the monster’s ki is getting even larger. Vegeta says, “I’m not going to Hell alone. I’ll bring you bastards along for the ride.”, and Kaiōshin realizes that Vegeta intends to die. Vegeta powers up a bit and rushes toward Boo. Before Boo can react, Vegeta lands a destructive kick and then follows it up with a punch to the face, sending him flying. 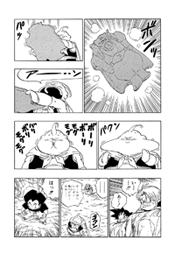 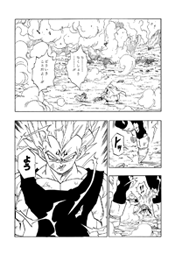 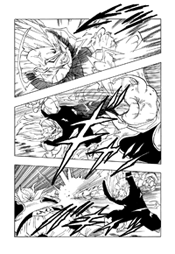