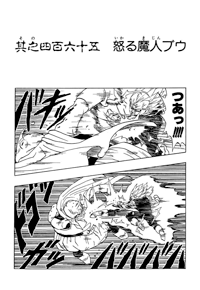 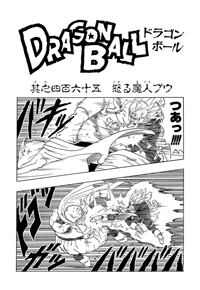 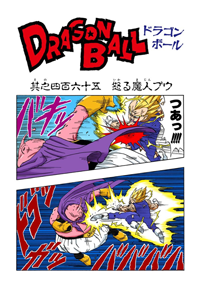 Vegeta continues attacking Boo with a barrage of punches and kicks, as Bobbidi wonders what Boo is doing. Kuririn is impressed, and Trunks is happy. Piccolo notes that he’s also surpassed Super Saiyan, and his power is even greater than Gohan’s was when he fought Cell. But then Piccolo remembers even Gohan was killed by Majin Boo. Vegeta sends Boo flying with a massive punch, but Boo simply hops back to his feet and heals all of the damage dealt by Vegeta. Boo looks up and is shocked to see Vegeta powered up and pointing his hand out toward him. Vegeta suddenly shoots out a thick ki blast, straight through Boo’s stomach. Boo falls to the ground, looking dead, and scaring Bobbidi. Vegeta smirks, and Trunks gets excited, until Boo gets back up, again.

Boo heals the large hole in his stomach, and angrily says that was a little painful. Vegeta thinks he’s rather creepy, as Bobbidi dances for joy. Boo starts creating a large energy ball surrounding himself, and now fully enraged, screams that he hates Vegeta. Everyone is shocked and really starts to worry now. Then in a blinding instant, Boo unleashes all of the energy he had harnessed. Bobbidi quickly casts a barrier around himself, Piccolo and the others attempt to run away, but Vegeta only has time to stand there and try to shield himself. There’s a massive explosion and entire area is blown up, with Vegeta and the downed Kaiōshin taking the brunt of it. Afterwards, all that’s left is a tremendous crater, with Boo and Bobbidi floating over it. Piccolo, Kuririn, Trunks, and Goten had managed to get away. Piccolo worries about Kaiōshin, while Trunks notices Papa, who is badly damaged now. 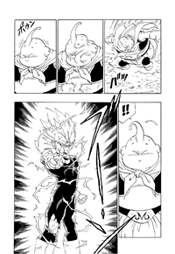 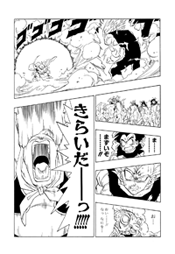 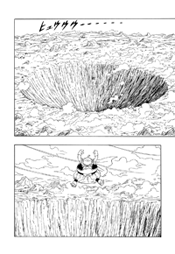