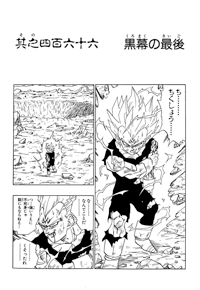 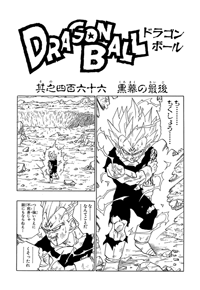 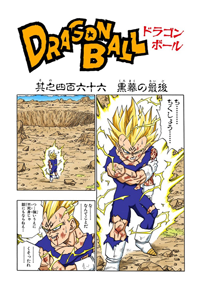 The End of the Man Behind the Curtain

Vegeta curses the situation, with his left arm now out of commission. Bobbidi notices Vegeta is still alive, and thinks he might have made a really great servant were he not so disobedient. Piccolo thinks that Vegeta can’t compete with Boo at all, Gohan is dead, and even Kaiōshin is gone. Trunks can’t believe his father would lose, but Piccolo won’t reassure him. Boo tells Vegeta, “It’s over for you. Bye bye.” Vegeta wonders what to do, as Boo rips out a chunk of his stomach, and stretches it out like dough. Vegeta asks what this disgusting bastard is up to. Boo shoots an explosive blast from his mouth that Vegeta just barely dodges, and then throws the piece of his stomach out so that it snakes around Vegeta, tying him up.

Boo does a happy dance, as Vegeta lies wrapped up on the ground. Boo kicks him across the ground, and then giggles as Vegeta coughs up blood. Boo then sits on Vegeta and starts pounding on him. Kuririn says he’s getting killed, and wonders where Goku or Gohan are, did they already die? Goten says his brother couldn’t die. Trunks is getting really restless, but Piccolo says there’s nothing he could do if he went besides die, which would just add to Vegeta’s pain. Trunks ignores that, turns Super Saiyan, and flies off. Goten does the same, and Piccolo gets mad at their hastiness. The boys zoom right past Bobbidi, leaving him confused. Trunks kicks Boo off of Vegeta, knocking him off into the distance, as Goten begins unravelling Vegeta.

The boys tend to Vegeta, and Bobbidi can’t believe Vegeta still has allies around. Bobbidi thinks it doesn’t matter how many of them there are, because Majin Boo is invincible, and he’ll kill them all. “Though I can’t forgive Majin Boo, the one whom I least can’t forgive is you, Bobbidi.” Bobbidi turns around, and Piccolo is there. “I can’t do anything to Majin Boo, but I can kill you.” Bobbidi says if he’s killed, no one can ever seal Majin Boo away, and then the entire world will be completely destroyed. Piccolo says the world would get destroyed even if Bobbidi didn’t die, and so Bobbidi starts to call Boo over to help. Piccolo then swipes his arm, and cuts Bobbidi in half with one clean chop. Bobbidi keeps talking as his remains fall back to the ground, and Piccolo spits down at him. Vegeta says, “Trunks… Take good care of Bulma, no, Mama…” Trunks is confused, and Vegeta smiles. 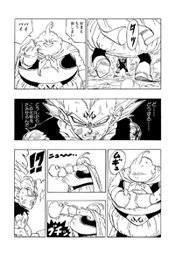 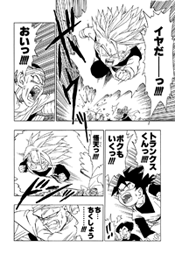 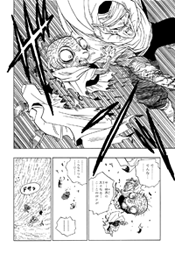