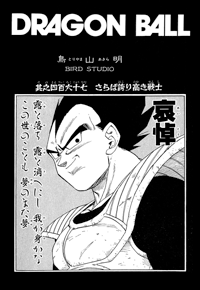 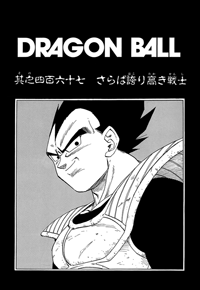 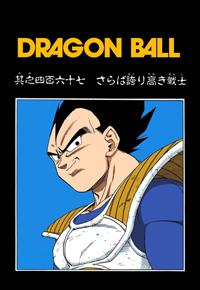 Vegeta tells the boys to take refuge somewhere, he’s going to fight Majin Boo alone. Trunks insists it would be better to fight together, but Vegeta says Boo can’t be fought using normal methods. Trunks and Goten say they’re both really strong. Vegeta tells Trunks that he’s never hugged him since he was a baby, and wants to now. Trunks is reluctant, but Vegeta hugs him anyway. Vegeta smiles, and tells Trunks to be well. Then he pops Trunks on the back of the neck, knocking him out. Goten freaks out, but then Vegeta punches him in the gut, to knock him out as well. Piccolo flies over to them, as Boo gets up and starts humming, wondering who it was that hit him.

Vegeta asks Piccolo to take the boys somewhere far away. Piccolo picks them up, and then realizes that Vegeta plans to die. Vegeta says nothing, and then asks Piccolo to tell him one thing: will he be able to see Kakarrot once he’s dead? Piccolo says no. “You’ve killed too many innocent people… If you die, your physical body will be gone. Your soul will also be sent to a different world than Goku. There, your soul will be cleaned, and your memories will be gone. You’ll be turned into a new life form.” Vegeta thinks that’s too bad, and tells Piccolo to hurry and go. Piccolo flies off with the boys and Boo prepares to stop him, but Vegeta halts Boo. He says he’s going to defeat Boo himself, calling him a balloon bastard.

Piccolo flies past Kuririn, and tells him to come along quickly. Vegeta says he finally knows how to defeat Boo. Boo is surprised, as Vegeta begins powering up. Kuririn asks Piccolo what Vegeta is up to, so Piccolo explains that Vegeta has resolved to fight for someone other than himself for the first time, throwing away his own life in the process. Vegeta continues charging up, and he says he’s going to blow Boo up into so many pieces that he won’t be able to fix himself again. He smiles and thinks, “Farewell… Bulma… Trunks… and even… Kakarrot…” Vegeta then self-destructs, creating a huge explosion bigger than the one Boo had made earlier. Piccolo and Kuririn, having flown quite a ways, feel the shockwave of the explosion. 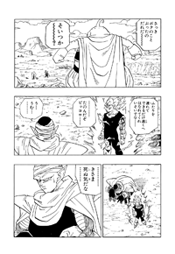 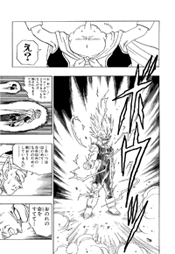 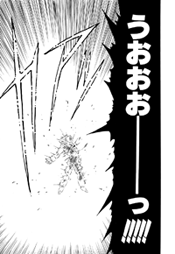