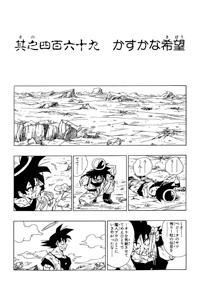 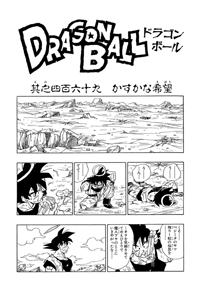 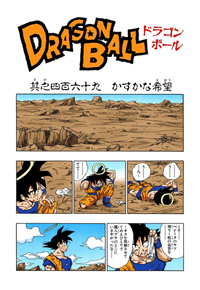 Goku finally wakes up, and sees that Vegeta took the last senzu. He realizes he was knocked out so Vegeta could fight Majin Boo alone. He feels Boo’s ki, but not Vegeta’s. He doesn’t feel Gohan’s ki, either, and wonders what happened. But he does feel Piccolo and Kuririn, meaning they’re no longer stone, and they probably know what’s going on. So, Goku teleports away. Up at God’s Temple, Piccolo says it will probably be about an hour before the boys wake up. Kuririn feels bad that Vegeta and Gohan are dead, and who knows what happened to Goku. Then he asks Dende if it would be okay to bring his family up here, knowing it’s probably wrong to want to save just his friends. Dende asks Piccolo, but Piccolo says to decide for himself. Dende doesn’t mind, since the Earth is still around because of them.

Kuririn prepares to leave, but he and Piccolo feel a familiar ki suddenly appear. Kuririn is excited that Goku’s alive (although technically he’s not). Goku wants to know what happened, but Dende says he will heal him first. Some time passes, and Goku can’t believe that Gohan, Kaiōshin, and even Vegeta have been killed. Piccolo says Kaiōshin was right to fear Boo, and now the whole universe will be in danger. Kuririn thinks that the fact that Goku is alive is their happiness amidst the sorrow. He says Goku is the only one who can defeat Boo, and asks if he still has more time remaining in This World.

“To put it bluntly, it’s impossible. I can’t defeat him. The difference in true strength between me and Vegeta was almost nil. Vegeta even gave up his life, but Majin Boo was barely affected, right? Sorry, but, there’s no way I could win.” Goku says he could’ve done something if at least Gohan or Vegeta were alive, though Piccolo says the amount of people there are doesn’t make much difference against Boo. Goku didn’t mean that, he wanted to use Fusion. Dende’s heard of this as well, it’s the special technique of the Metamorians. Goku says he learned it from a Metamorian in the Heavenly Realm. It’s a union technique that only two people of similar power and body size can use. Two people fuse into one, and they can become an incredibly powerful person. Metamorians are weak on their own, but with Fusion, they become halfway decent warriors.

Piccolo realizes Goku could have fused with Gohan or Vegeta if they were alive. Goku says he was taught the technique, but he’s never actually done it, since there was no one like him there. But even so, it took him a week to learn the technique. Piccolo thinks it’s futile either way, but Kuririn thinks Goku can go back to the dead and fuse with Gohan or Vegeta. Piccolo bursts his bubble though by saying that even if Goku fused with either one, he couldn’t return to This World, and besides, Vegeta isn’t in the Heavenly Realm. Mister Popo then suggests that the two sleeping inside, Goten and Trunks, have near equal power and size. Goku thinks that’s great, and says he’ll teach them Fusion until he has to leave, and then Piccolo can train them afterwards. Piccolo agrees, and Kuririn gets excited at this faint glimmer of hope.

Piccolo thinks that it will take a long time for the boys to master Fusion, and many lives will be lost to Majin Boo in the meantime. Perhaps everyone will be annihilated, or even the Earth itself will be destroyed. Goku says as long as they’re alive and they have the Dragon Balls, they can fix things. Kuririn prepares to leave to fetch everyone, when the sky suddenly turns black. It’s Shenlong. Kuririn figures it must be Bulma who summoned him, and wonders why she’d gather the Dragon Balls without knowing the circumstances yet. Goku realizes they must mean to return to life the people Vegeta killed at the Budōkai. Dende says it’ll be a year before they can use the Dragon Balls again if they make three wishes, and so Goku focuses on their ki and teleport away.

Outside of Capsule Corporation, everyone else has gathered, as Shenlong tells them to speak their wish. Yamcha knows what to say: “Please return to life the people who died today! Oh! Except for the bad people!” Shenlong says it is granted, and wants to know their second wish. Goku arrives just then, and realizes he’s too late, while everyone else he shocked to see him. He telepathically contacts Dende, explaining that one wish has already been used up. Dende says if they only used one wish, then it will only be a four month wait. Goku understands, and tells Dende to tell Kuririn that he’ll bring everyone there, since they’re all gathered with him now. Goku then tells Shenlong they’ve made enough wishes, and so Shenlong bids them farewell. Yamcha asks Goku what’s going on. Meanwhile, Bobbidi is still flying on Boo’s back, and he wonders why it suddenly got dark and then bright again. And elsewhere, Kibito is alive again, and can’t believe it. 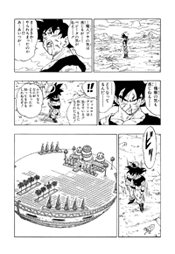 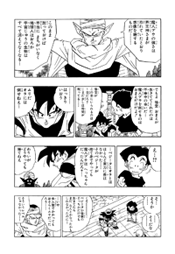 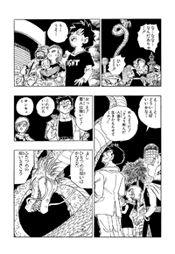