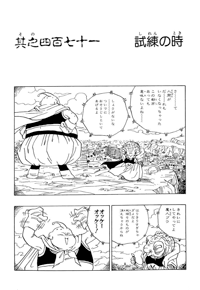 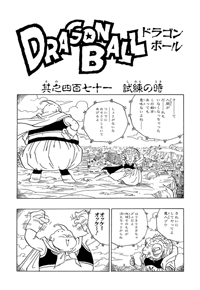 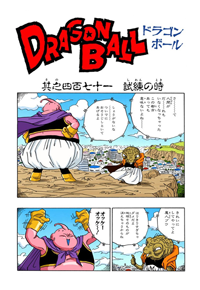 A Time of Tribulation

Now Bobbidi wants Boo to make the city look “neat”, but not too much, so he doesn’t blow up the Earth. Boo takes a deep breath, and then exhales all over the city, completely blowing it up. Bobbidi shows everyone an image of Piccolo, Trunks, and Goten again, and anyone who knows where they are had better speak up, if they don’t want to be turned into candy and eaten. And they’d better hurry, because everyone on Earth will be destroyed within five days. To contact Bobbidi, just call him out by thinking of him in your head. Someone suddenly contacts Bobbidi, a Budōkai attendant, to say that those three were participants today. Their names are Ma Junior, Trunks, and Son Goten. Bobbidi doesn’t care about names, he wants addresses, but the attendant doesn’t have those. So, Bobbidi kills the guy by making his head explode.

Bobbidi warns people not to waste his time like that, and tells everyone that they could be next. He tells everyone they have five days, again, and then ends the transmission. Piccolo is livid at this turn of events, and wants to go to prevent the loss of lives. Goku says not to talk stupid, he needs Piccolo to teach the boys Fusion when he’s gone. That’s the only way to defeat Boo, and they’ll destroy the Earth either way. They can restore the people and the planet with the Dragon Balls. Piccolo agrees, and calms down. Far away from Earth in the Kaiōshin Realm, Kaiōshin tells Kibito to heal Son Gohan. Gohan wakes up, and wonders where they are. When he hears Kaiōshin Realm, Gohan figures he’s dead.

Kibito says originally, no mortals, or even gods or Kaiō, could come to this sacred land. Gohan remembers that Kibito should be dead, and asks if he revived himself. Kibito says no, but he doesn’t know how he came back to life. Gohan asks why he’s here, and Kibito would like to know as well. Kaiōshin says, “I want you to use the Z Sword to defeat Majin Boo. Gohan, of all people, should certainly be able to use that sword.” Kibito freaks out, and says there’s no way a mortal could ever use that legendary blade that no one, even Kaiōshin, have been able to use. Kaiōshin says Kibito was dead, so he doesn’t know how unbelievably incredible Gohan’s power really is. He wants to go try now, so the three of them fly off toward its location.

As they fly along, Kibito says Gohan’s [tattered] clothes are inappropriate for this sacred land, and so he magically gives Gohan an outfit just like his own. Kaiōshin thinks it looks good on him, but Gohan feels weird looking just like Kibito. The three of them land atop a very tall, thin pillar-like plateau, where the Z Sword is stuck in the ground with only the hilt visible. Kaiōshin asks Gohan to pull it out, and Gohan thinks this sounds like an old story. Back on Earth, the boys are awake. Trunks is sad and sniffling that his Papa was killed, while Goten cries about Gohan. Goku yells at them not to cry, right now they need to learn a new technique so they can get revenge. Goku says they have to hurry, in case Bobbidi finds this place, so Piccolo suggests they use the Room of Spirit and Time. Goku says that someone can only use that room for at most two days in their life, and they may need it sometime in the future. Goku thinks there should be enough time here, and says it’s time to begin. 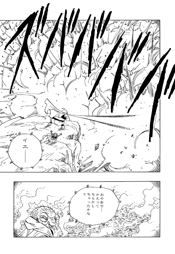 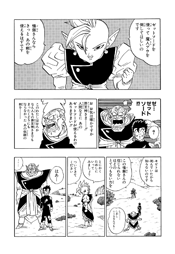 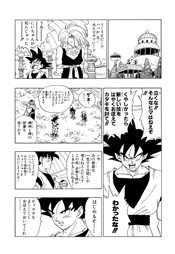