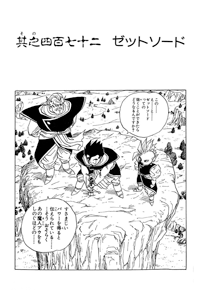 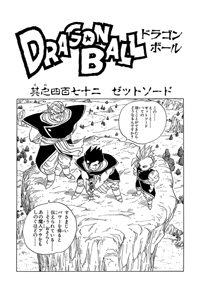 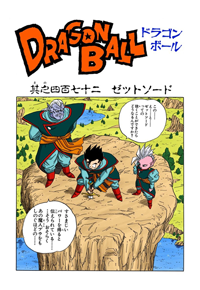 Gohan asks what will happen when he pulls the Z Sword out, and Kibito says he’s supposed to gain tremendous power, probably more than enough to beat Majin Boo. Gohan is amazed, but Kibito assures him he can’t pull it out anyway. Kaiōshin tells him (nicely) to shut up and watch. Gohan starts pulling, putting all of his might into it and really struggling, but it won’t come out. Gohan then stops and grasps his hands, and Kibito smirks. Gohan then transforms into a Super Saiyan, but Kibito doubts it will make much of a difference. Gohan starts pulling again, and he still struggles, but it eventually begins to budge. Gohan pulls it all the way out, shocking Kibito and making Kaiōshin happy.

Back on the ground, Kaiōshin asks how the sword is. Gohan, no longer Super Saiyan, says it’s heavy and all, but it doesn’t seem like there’s much power in it. He doubts it could really beat Boo. Kibito says of course it can, so long as the wielder is able to use it freely. Gohan asks Kibito to try holding it, and hands the sword over to him. Kibito immediately drops it, leaving a huge dent in the ground, and Kibito can’t get it up again. Kibito plays that down, but then yells that he must be able to use the sword freely.

Goku explains that if they use Fusion to successfully fuse, they should be able to stay that way for thirty minutes. After thirty minutes are up, they return to normal, and won’t be able to use Fusion again for a while. Piccolo thinks thirty minutes is too rough. Goku says with those two, thirty minutes should be plenty. Goku asks them to turn Super Saiyan now, but the boys just scowl at him. Trunks asks where he was when Papa and Gohan were killed. Unconscious. Hearing that, Trunks thinks he must be a real weakling. Goten says they couldn’t get strong by learning techniques from such a weakling.

Piccolo gets angry, but Goku says they’re right, he is a weakling. But even if he is weak, he must teach them Fusion, that’s the only way if they want to get revenge for Vegeta and Gohan. “Hehehehe… Here we are once again, people of Earth! The Mage Bobbidi, and Majin Boo!! This time we’ve found a much larger city than the last one. We’re now going to turn this city into nothing, if the three called Ma Junior, Trunks, and Goten don’t come here right now.” Some people within the city realize it’s their city, and notice Bobbidi and Boo in the air. Trunks notices they’re being talked about, and Goten says you can see Boo and Bobbidi if you close your eyes. Piccolo says they’re better off not looking.

“It seems like we haven’t been contacted by anyone… Too bad. We’ll just have to increase the number of victims. This time, he’ll turn them into chocolate and eat them.” Boo shoots out magic, turning the citizens into chocolate bars, and Trunks and Goten can’t stand watching. Boo eats his chocolate, and then destroys the remains of the city. “It seems that Majin Boo has had his fill from this chocolate. So, we’ll just blow the next town to dust right off. Now then, where shall we go next…” Trunks and Goten then call out to him. “Oh my! At last they’ve contacted me themselves.” Trunks angrily says that in a short time, they’ll kill them. Piccolo yells to stop talking to Bobbidi before their location is exposed. “Hey!!! Where are you, where!!! Come here!! Are you hiding?! Cowards!!!” Goku thinks they must really want to train now, and Trunks and Goten each nod in agreement. 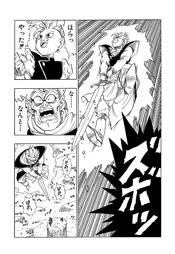 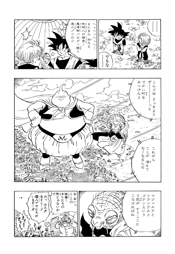 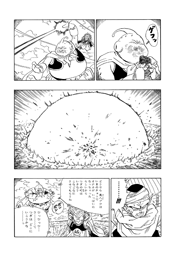