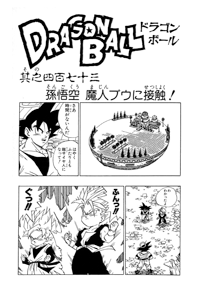 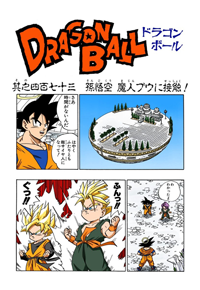 Goku says there’s no time to mess around, so they need to hurry and turn Super Saiyan. They both transform, and Goku tells them to raise their ki as high as possible. Trunks tells Goten they should surprise him, and they both power up further. Piccolo is blown away, but Goku doesn’t flinch at all. Goku tells them Trunks’s ki is a bit higher, and they must be equal for Fusion to work. So, Trunks needs to suppress his ki a little to match Goten’s. He messes with it a bit, until Goku tells him he’s got it. Goku says to remember that, and then tells them to turn back to normal. Trunks is annoyed at having to match Goten. Goku says next they’ll try raising their ki to the max in normal mode, since using Fusion as Super Saiyans will be hard.

“People of Earth! Just now, I’ve gotten some great information. One of those three, the brat called Trunks, lives in the place called Capsule Corporation in West City. We’ll go there now. It’ll be great if you’re there, but it would be even better if you hurried up and showed yourself. Because the town you live in is about to disappear.” Trunks gets mad, because Grandpa and Grandma are still there. Bulma comes in and complains to Goku that her parents will be killed, but Goku reassures her that they’ll use the Dragon Balls to return them to life. Bulma says West City will also be destroyed, so Goku says they’ll bring that back with the second wish.

Piccolo objects, saying that they’ve already brought back many people with the first wish, so there’s only one wish left. Goku thinks they could say “Return everything to normal” as the next wish, but Piccolo is unsure. Bulma buts in saying that if the laboratory is destroyed, the Dragon Radar, which uses very special parts, will be destroyed along with it. In other words, they couldn’t summon Shenlong anymore. Goku says he’ll hold off Boo and Bobbidi for a while, and tells Trunks to go home and get the Radar. Trunks wonders if he’ll be okay holding them off, but Goku says sure, if it’s just for a little while. Goku teleports away, and then Trunks flies off.

Bobbidi says Boo is flying too much, and is worried he’ll fall off. Boo seems silently annoyed. Goku suddenly appears in front of them, and Bobbidi is surprised Vegeta didn’t kill him. Bobbidi also thanks him, since it’s because of him that Boo was revived. Goku says he and Vegeta were both too naive, and didn’t think Majin Boo would be this awesome. Boo laughs at the compliment, while Bobbidi wants to know why he’s here, to tell them where those three are? Goku says of course not, one of them is his son. He’s come to give some advice. Bobbidi thinks this is interesting, and wants to let the whole Earth hear this advice. Goku promises they’ll see those three in a short time. But in the meantime, they need to stop the pointless destruction and tormenting the weak, and just wait.

Bobbidi asks why wait, so Goku explains that those three are under special training to defeat them. Bobbidi and Boo laugh at that. Bobbidi says they won’t wait, and they’ll continue to kill Earthlings until they come out. Goku had thought as much, so he’s going to oppose them for a while. Bobbidi says to go ahead, thinking he wants to be killed like Vegeta. Boo sits there whistling, and Bobbidi yells at him to hurry up and attack. Boo starts stretching, and Goku wonders why he listens to Bobbidi even though he’s so strong. Bobbidi tells Goku to shut up, Majin Boo is his servant. Boo glares at Bobbidi, so Bobbidi asks if he wants to be sealed away. Boo says, “If you seal me away, you’ll be killed by him.” Bobbidi is pissed that Boo has suddenly gotten wise.

Boo will kill him anyway, though. He looks like a “good boy”, so Boo hates him. Goku realizes there’s no choice. Bobbidi tells the people of Earth to take a good look, this is what happens to people who defy him. Goku then transforms into a surpassed Super Saiyan. Trunks stops flying and notes that Goku’s at the same power as his Papa was. Bobbidi says this is pointless, Vegeta did the same thing. Goku says, “Well, why don’t I try surpassing the level of Super Saiyan that surpasses Super Saiyan…” 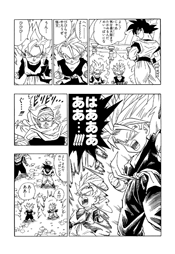 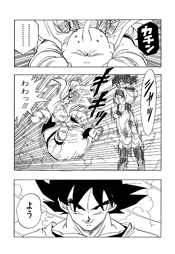 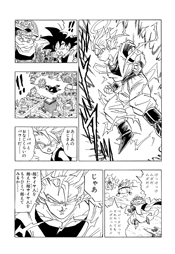