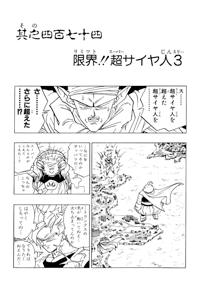 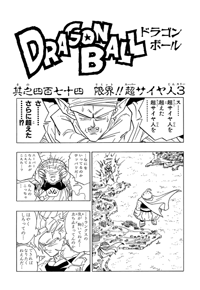 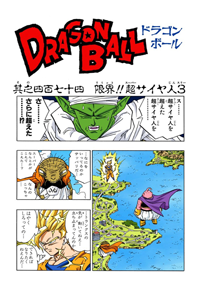 Piccolo tries to figure out what Goku said, while Bobbidi thinks it’s just nonsense. Goku notices Trunks’ ki has stopped moving, and hopes he hurries up. Trunks is sitting mid-air watching the events between Goku and Bobbidi, so Goku yells out at him to hurry up and get the Radar. Bobbidi wonders who he was talking to, and figures he has some sort of futile plan. Goku thinks he’ll just have to buy more time, and then returns to normal. Boo thinks he’s given up. “That’s not it. I’m gonna explain Super Saiyan so you guys understand.” Bobbidi says that’s dumb, they don’t want to know. “Don’t say that. First, I guess this is my normal state.” He transforms. “This is Super Saiyan.” He transforms again, to the spikier lightning level. “And this is what you saw before. Super Saiyan that surpasses Super Saiyan. Or Super Saiyan 2, you could say.”

Bobbidi thinks these transformations are meaningless. “And…” Kuririn thinks Goku’s bluffing. “This… Surpasses even that…” Goku starts transforming, this one not being an immediate change. Kaiō wants him to stop, or else his remaining time will… Bobbidi and Boo are shocked, as Piccolo says his ki is rising rapidly. Even Tenshinhan, way off in the mountains somewhere with Chiaotzu, says the Earth is shaking and wonders what Goku’s up to. Goku finally completes the transformation. His hair is much longer, there’s a lot more lightning, and he’s lost his eyebrows.

“…This is Super Saiyan 3. Sorry it took so much time. I’m still not used to this form.” Everyone is amazed, and even Gohan stops his Z Sword training to wonder if that’s his dad’s ki he can feel. Kaiōshin says it really is Son Goku, and Kibito can’t believe they’d feel his power all the way here in this sacred land. Gohan wonders what is going on. Back on Earth, Boo says Goku’s face has gotten scary, but Boo’s not scared at all. Bobbidi thinks this is nothing much, and tells Boo to beat him up, as the entire Earth watches. Goku flies forward, grabs Boo’s forelock, and then punches Boo a few times with his free hand. Goku then swings Boo around, letting him go so that Boo crashes into the ocean.

Boo flies out of the water, and lets off a volley of blasts at Goku. Goku manages to swat them all away, thinking Boo was hardly damaged by his attack, and Boo just used one of Vegeta’s techniques, meaning he can pick up his opponent’s techniques just from fighting for a little while. Boo stretches his arm out to punch Goku in the face from a distance, but Goku is barely damaged, either. Kaiō wants Goku to stop, because using that abnormal power will greatly reduce his time on Earth, and then there will be no one to teach Fusion to the kids. 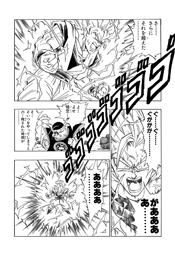 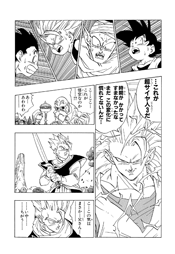 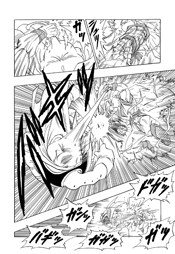