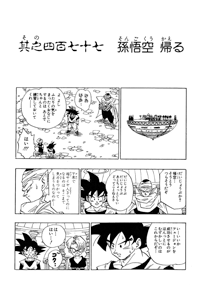 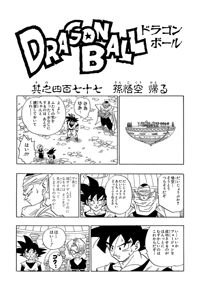 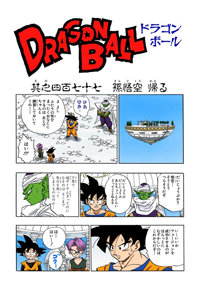 Goku says they’ll have to practice making their ki identical later, and Piccolo asks Goku if he’s alright. Goku insists he’s okay, while Piccolo contemplates how much energy Super Saiyan 3 uses in the living world. Goku says for now, they’ll master Fusion. Once they have their ki identical, they have to both do the Fusion pose exactly the same. He’ll teach them the pose now, so pay close attention. First, stand a distance away from each other. Then, throw your arms to the side like this, keeping them straight. “Fu…” Next, throw your arms to the opposite side and approach each other by making three steps like this (knees bent outward). “sion…” Then, throw your arms out to the other side again, making hands into fists, and kicking your outer leg up with the knee bent. “Ha!!!” Throw your hands over your head, and make sure your fingers are pointing like this. Inner leg must be bent, and outer leg must be straight.

Everyone is speechless, until Trunks says he thinks that’s really lame. Goku says they’ll have to both do it with “left and right symmetry”, but the boys don’t know what that means. So, Goku wants Piccolo to try it with him, but Piccolo is quite reluctant… Goku says they’ll have to move in reverse, like a mirror’s reflection. So, Goku and Piccolo mirror each other’s movements, moving toward each other and ending up with their fingers touching. Now it’s the boys’ turn. Piccolo says that even if Vegeta were alive, he would never have done this, and Goku isn’t sure why…

Boo is flying along, and he yawns, saying he’s getting sleepy. So, he lands in a village and decides to make a house so he can nap. But, it’s too noisy (people are screaming at his presence), so he’ll make it quiet. Boo gathers all of the living things, lifting them into the air and turning them all into clay. Next, he “cleans” up, by destroying the surrounding landscape. Boo takes his big mound of clay, and molds it into a very weird house, shaped like a beehive. He climbs inside through a hole in the side and shows everyone around. This is where he eats his food (he’s sitting at a table). This is his bath tub (he’s taking a bath). This is the toilet (he’s sitting on it). This is where he brushes his teeth (he’s at the sink brushing). And this is the bed (he’s sleeping). Boo wakes up and says, “Mmmmm, I guess I’ve slept for about five seconds. Now then, I’ll go kill, kill!”

Goku and Piccolo are training the boys, nitpicking at their movements, and Kuririn, one of the spectators, wonders about the dance training. Baba arrives, saying it’s time to go back now. Goku tells Piccolo it’s all up to him now, but the boys should have Fusion mastered by tomorrow. Everyone gathers around to say their goodbyes, and Goku tells Chi-Chi not to feel bad, she still has Goten. Chi-Chi thinks he might be killed by Majin Boo, but Goku insists he won’t if he masters this technique. Goku says he’ll try to give his regards Gohan in the afterlife, but Videl still insists she thinks Gohan’s alive, somehow. Kuririn doubts it, since they don’t feel his ki, but Goku thinks it’s likely. Baba says they really must get going, but Goten seems to want something. Chi-Chi realizes he wants a hug from his daddy, but Goten just puts his head down. Goku then picks him up and hugs him, and tells Goten to look out for his mother. Flying off with Baba, Goku yells back at everyone. “Later, guys!! Let’s meet up again when you’re dead!!” Goku poofs away, and Kuririn smiles, thinking of what a jerk he is. 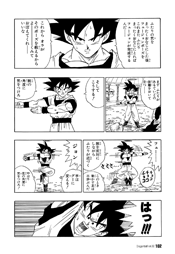 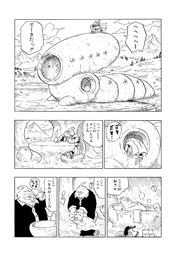 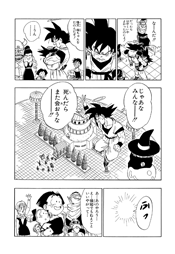