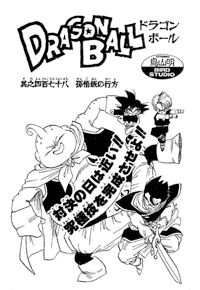 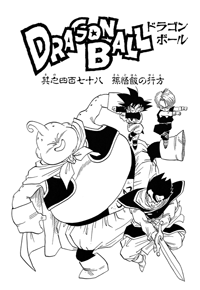 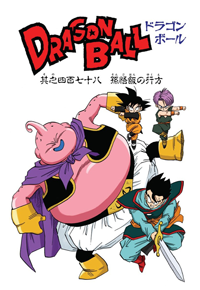 Uranai Baba drops Goku off in the afterlife, and Goku runs into Enma-daiō’s office to ask him a question. But first Enma-daiō asks Goku what’s happening on Earth, as there are quite a few dead people to deal with. Goku says everyone on Earth will probably be coming here, but he wants to know if someone named Son Gohan came here shortly before the large amounts of Earthlings started coming in. That guy’s his son. Enma-daiō says he hasn’t, and he would’ve known right away if he saw Goku’s son. Goku is glad Gohan’s not dead. Enma-daiō says someone even more amazing did come here, though. The king of the Evil Demon Realm, Dabra. Since he probably would’ve liked Hell, Enma-daiō sent him to Heaven. Goku thanks him, and flies off.

Goku realizes that Videl girl was right, but wonders why they never felt Gohan’s ki. Suddenly, he does feel Gohan’s ki, but it’s not here or in the Kaiō Realm. Goku teleports toward it and arrives in the Kaiōshin Realm to find Gohan practicing with the Z Sword. Everyone is shocked to see him. Goku wonders about Gohan’s clothes, and then notices Kaiōshin and that other guy who died. Kibito freaks out that there’s yet another mortal on this holy ground. Gohan asks why he’s here, and so Goku explains. Some time passes, and Gohan contemplates everything Majin Boo has done to the Earth. Goku wants to hold the sword for a bit, and says it really is very heavy, swinging it around a bit. Goku asks Kaiōshin if he can stay here until Gohan goes to fight Boo, and also asks if he can have some food. Kaiōshin asks Gohan if he also wants to rest, and so they all head off. Gohan wants to see Super Saiyan 3 after they eat.

Back on Earth, a whole day has gone by… Piccolo wakes up the boys. He tells them to wash up and get some food so they can resume training. They must completely master Fusion in one day. On the Earth’s surface, Majin Boo has already destroyed two-thirds of the people and cities. Boo flies along, spotting a boy walking down a road, and thinks he won’t let anyone get away. Boo lands in front of him, but the boy just happily says hello and asks who it is. Boo thinks he should recognize him. The boy says his eyes can’t see, and wonders if Boo is supposed to be someone famous. Boo thinks he’s dumb and just has his eyes closed. The boy says even opening them he can’t see, he’s been blind since birth.

Boo realizes he isn’t scared because he can’t see him, and so he magically restores the boy’s sight. The boy opens his eyes, and now he can see! He looks at Boo, but he’s still not scared, just grateful. Boo is confused, and sits down with the boy for a bit. The boy figures Boo must be a foreigner for having that thing on his head. Boo asks the boy if he thinks he’s cool, and the boy supposes he is fairly cool, which makes Boo happy. The boy decides to give him some money as thanks. He was supposed to use this money to buy milk, but all the stores are closed. Boo tries to eat the money, but it’s yucky, so he flies off. The boy is surprised that foreigners can fly. Boo finds a guy loading his car, and turns him into milk and brings it back to the boy. He tells him milk is yummier than money and flies off. Boo then comes across another town, and blows it up, creating a huge smoke cloud as he looks on in enjoyment.

Meanwhile, Gohan is easily swinging the Z Sword around, and Goku compliments how well he’s able to wield it after only one day. Goku bets the sword can cut really well, and wants to test it. He picks up a big boulder, and prepares to throw it at Gohan. 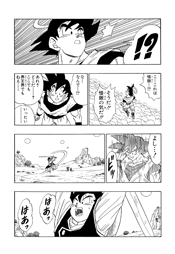 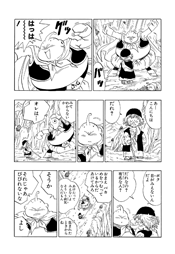 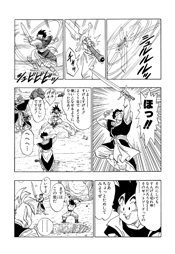