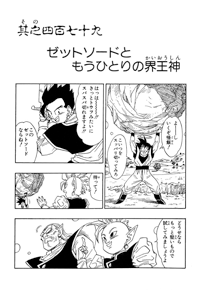 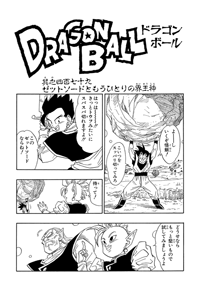 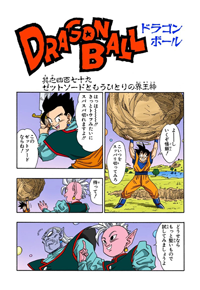 The Z Sword and Another Kaiōshin

Goku readies the boulder, and Gohan thinks he can slice it like tofu. But Kaiōshin thinks they should test it with something harder and makes a big cube appear out of thin air. He tosses the cube over to Goku and explains that this is the hardest metal in the universe, Katchin Steel. Goku taps it a bit and is quite impressed. He asks Gohan if he’s ready, and then throws the block of Katchin Steel at him. Gohan swings the sword at it, but… the Z Sword breaks when it connects with the block. Everyone is completely shocked, and Goku blames it on Kaiōshin, but Kaiōshin says that the legendary sword was supposed to hold the greatest power. Gohan thinks the legend may have been exaggerated, as he drops the sword’s broken remains.

Gohan does perk up and say his physical strength has gone way up, since the Z Sword was so heavy. Maybe that was the source of the greatest power, and Kaiōshin agrees that Gohan has probably powered up greatly. Goku’s unsure if that’s enough to beat Majin Boo, though. An old man, in a Kaiōshin outfit, suddenly shows up, scary the heck out of everyone, and says that’s not it. Everyone wonders who he is, and the old man says he’s a Kaiōshin from fifteen generations ago. A long time ago, a very strong and evil person, maybe not at Majin Boo’s level, sealed him away in that sword. The person was afraid of his ‘fearsomeness’. Goku thinks the old man doesn’t look so awesome, and decides to test him by shooting a blast at him. It hits Old Kaiōshin right in the face and he hits the ground hard.

Gohan is curious about what he’s up to, and so Goku says that when Gohan gets back to the lower world he can ask his girlfriend, that girl Videl, to do it. Gohan freaks out and objects. Goku relents and asks Old Kaiōshin if instead he’d mind an older woman. Goku tells Gohan to tell Bulma the circumstances, and Gohan thinks he can’t ask her something like that. Goku asks Old Kaiōshin if this ability can beat Majin Boo, and he says it’s not definite, but most likely it can. Goku says she could save the universe just by getting felt up a little, and Gohan thinks that’s sexual harassment. Besides, and even if they can save the universe, he’ll be killed by Bulma. But Goku isn’t listening to Gohan and shakes Old Kaiōshin’s hand.

Now that it’s settled, Old Kaiōshin explains his super ability. No matter how amazing of a master you may be, he can bring out all of your hidden power far beyond your limits. Goku thinks he’s heard of that ability before, but Old Kaiōshin insists no one else can do it well beyond the limits like this. He looks at Gohan, seeing that he was the one who pulled the sword out, and says that he can surely make someone who could pull out that sword and swing it around into the strongest in the universe. Though, he’d thought the one who’d free him from the sword would be a Kaiōshin, not an Earthling. Kaiōshin solemnly apologizes.

Old Kaiōshin tells Gohan to stand there, and not to move. Then, he starts doing some funky dancing, circling around him. Gohan tries to ask about this, but Old Kaiōshin tells him to be quiet for this important ritual. Goku asks how long this will take, and Old Kaiōshin says five hours for the ritual, twenty hours for the power up. Goku decides to take a nap, while Kibito and Kaiōshin realize they should probably stay awake. Gohan doesn’t like this at all. Meanwhile, Trunks and Goten are still practicing Fusion, and Piccolo says they’ve nearly perfected it. Now, he wants them to test it, and tells them to match their ki exactly. Trunks is doubtful that the two of them can really fuse. Piccolo shouts that it’s time to begin. 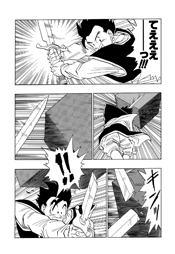 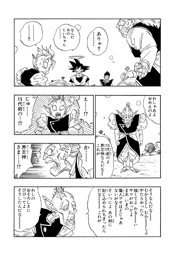 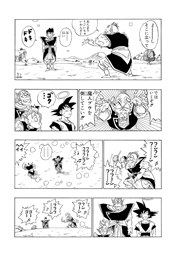