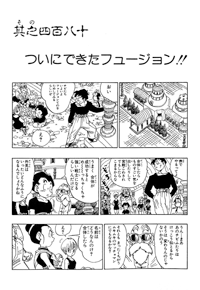 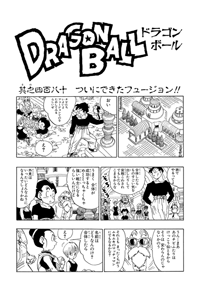 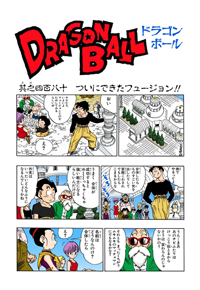 The Fusion is Completed at Last!!

Yamcha tells the others that the youngsters are about to try Fusion, and so everyone walks over to watch. Yamcha says they’re going to try it outside, since while fused, they could have such an incredible ki that they’d blow up the inner shrine. Kuririn is convinced they’ll likely become a very strong warrior, but wonders what they’d look like. Kame-Sen’nin thinks they already look similar, so they probably won’t change too much. But then again, they could look like a completely different “macho man”. Chi-Chi wonders what their name will be, either “Gotenks” or “Trunten”. Bulma says it won’t matter, since they’ll only be fused for thirty minutes.

Piccolo instructs the boys to match their ki, and begin. “Fu…sion… Ha!!!” There’s a big flash as the two begin to fuse. Everyone looks up, and standing before them is a large, pudgy kid. Everyone is shocked. Bulma hopes they can return to normal, while Kuririn doubts this is the stronger-than-Majin Boo-warrior that Goku mentioned. Yamcha gets it: an eye for an eye, a fatty for a fatty! The kid begins running, but stops five seconds later, panting hard. Kame-Sen’nin thinks this was a failure, and Piccolo realizes why, scolding the kid about Trunks having his fingers out instead of a fist. Piccolo tells him to turn back, but he doesn’t know how. So, they’ll just wait the thirty minutes. Everyone talks to him, and they find out his name is Gotenks.

After thirty minutes, Gotenks splits back into Trunks and Goten. Everyone tries to talk to them, but Piccolo says they’ll have to talk later. Now, they must fuse again. “Fu…sion… Ha!!!” (Trunks’ finger is slightly off at the “ha” part.) Another flash, and… tada! This time a very frail kid appears, and everyone realizes it was another failure. Piccolo scolds them about the finger being off, and thinks they’ll have another thirty minute wait, as Gotenks stands there wheezing like an hold man. Once again, “Fu…sion… Ha!!!” Kuririn comments that it seems like the author has been taking it easy up until now, with the panels of the Fusion pose being almost “copies” of each other. Toriyama appears behind him, saying that he hopes the Chief Editor will pay him in-full for this page.

After the flash, a decent-sized, normal-looking warrior appears. Everyone is blown away by his ki, except for the ladies. Piccolo thinks this is great, and in another thirty minutes, they can try it as Super Saiyans. “Hehehe… Aren’t you underestimating me? I’m enough to defeat Majin Boo as I am now.” Piccolo says he’s stupid, not knowing anything about Boo, and he definitely can’t win as he is now. “Don’t toy with me. Okay, I’m going to show you right away. Majin Boo’s corpse, that is.” Gotenks flies off, ignoring Piccolo’s protests. Piccolo thinks he’s an idiot, and he’ll be killed. Kuririn wonders if he can’t actually win, though, as Yamcha agrees that he was certainly very confident. But, Gotenks soon returns all beat up, and everyone falls over. Piccolo says they’ll fight Boo tomorrow, but for now, they need more training. Meanwhile, Old Kaiōshin continues his funky dancing around Gohan, who looks miserable. 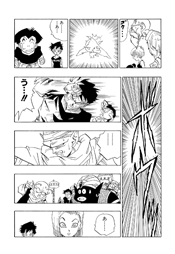 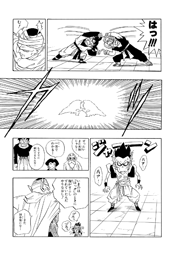 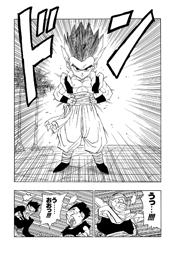