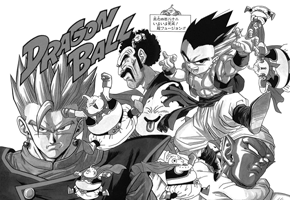 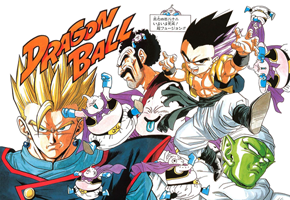 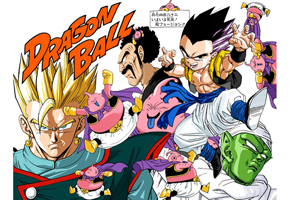 Goku, who is eating under a tree while Kibito reads a book next to him, asks Kaiōshin if he really thinks Gohan will power up from all this. Kaiōshin thinks so. The funky dancing ritual is now over, and the two of them are both sitting down, with Old Kaiōshin’s hands facing out toward Gohan. Gohan peeks his eyes open, and notices that Old Kaiōshin is asleep, and yells at him. The old man insists he’s awake, and says no more talking, then dozes off again. Gohan thinks this is hopeless. Back on Earth, Piccolo wants the boys to try Fusion as Super Saiyans. After last time, Piccolo warns them not to get too cocky if the Fusion is successful. The boys nervously chuckle…

Piccolo tells them to go ahead and the boys each turn Super Saiyan, matching their ki. “Fu…sion…Ha!!!” After a bright flash, Super Saiyan Gotenks appears. Piccolo says his ki is certainly incredible, but wonders how well he can move. Gotenks says Piccolo’s that house will get busted up if he shows him here, so he’ll go down to the ground. Gotenks zooms off, and Piccolo reluctantly gives chase. Gotenks flies all over the world, and finally lands and waits a while for Piccolo to catch up. Gotenks says that’s his speed, but now he wants to test his power by beating up Majin Boo. Piccolo tries to stop him, but Gotenks flies off again, as Piccolo says he only has one more minute left to be fused. Gotenks arrives at Boo’s house, and calls him out. But, poof! They revert to Trunks and Goten, and then run away. Boo comes outside and wonders what that was, but Satan says it was nothing, as no one would dare talk to Boo like that. 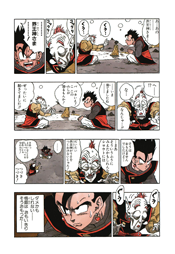 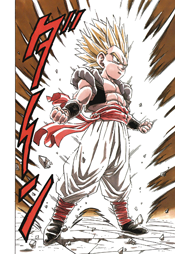 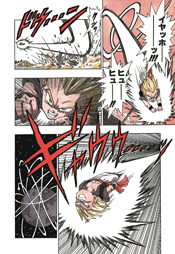