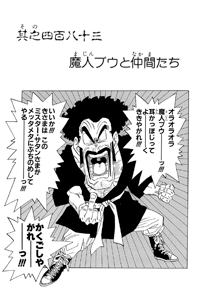 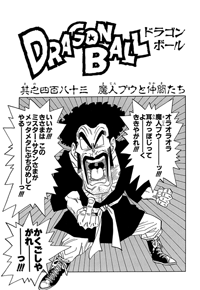 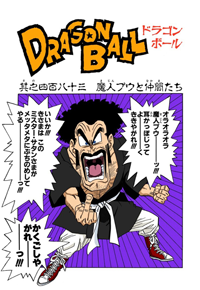 Satan is crying as he reads “A Dog of Flanders” to Boo, who laughs and thinks it was funny. Boo decides it’s time to go kill again, now that they’re done reading, but Satan declines to go with him, instead offering to stay home and cook. After Boo leaves, Satan calls him a dumbass, and spouts off some other little threats. Satan goes back inside, and pulls some dynamite out of his bag that’s strong enough to blow up a tank. Once he presses the “remote switch”, he’ll have saved the world. Satan hides the dynamite in a pot, and hopes Boo comes back soon. Meanwhile, an old couple is walking along, hoping to hide in the mountains to be safe from Boo. Suddenly, the old woman gets shot in the head by a sniper.

The sniper tells his cohort that he had always wanted to shoot people, and since everyone will be killed by Majin Boo anyway, he’s doing it now. He wants his cohort to snipe the old man next, which he does, and he finds he likes it too. The two of them then hop into their car, and decide to head for the city, where there are more people left. Back at Boo’s house, Satan is busy cooking, thinking about how he’ll be a hero, when he notices Boo is returning. Satan apologizes and says he’s still cooking, but Boo has brought a puppy with him. Boo says the puppy isn’t afraid and won’t run away. Satan says it looks like the puppy’s leg is injured. Boo decides to heal it then, so the puppy can be scared and run away.

But, instead of running, the puppy acts friendly. Boo doesn’t understand, so Satan explains that the puppy is happy to have been helped, and has taken a liking to Boo. Boo then tries running away, but the puppy happily follows. Boo asks if the puppy really likes him, and Satan says it seems he does. Boo thinks he must be like Satan, and Satan admits to liking Boo also. Boo is happy, and offers the puppy chocolate, but Satan says chocolate is bad for dogs and he needs dog food. Boo doesn’t know what that is, so Satan offers to go buy some. Satan drives a distance away on a scooter, and prepares to blow off the dynamite, but the sight of Boo and the puppy playing makes him change his mind.

The sniper and his cohort are driving through town, shooting at everything with machine guns. 38, 39, 40 people. The cohort is worried that Majin Boo could show up, since he’s supposed to live nearby, but the sniper insists it’s okay because they have these powerful bazookas. Back at the house, the puppy likes his dog food, but Boo thinks it’s yucky. Satan wants to know something from Boo… Why does he kill people and destroy houses? Boo says it’s fun. Bibbidi and Bobbidi said that’s how to play. Satan asks who they are, and Boo says they’re his creators, and they’re bad. Satan says if they’re bad, he shouldn’t listen to them, and shouldn’t kill or destroy. Boo asks if he really thinks that stuff is bad, and Satan says yeah. Boo then promises to not kill or destroy anymore.

Satan thinks he really is a hero, and he really has saved the world. The sniper and his cohort are now nearing Boo’s house in their car, and the cohort is much more worried than the sniper is. Boo and the puppy are playing with a ball, and Boo throws the ball way out. The puppy chases after it, but is suddenly shot by the sniper from atop a small cliff. The cohort wonders if that’s Mister Satan down there with Majin Boo, as Boo looks absolutely shocked. 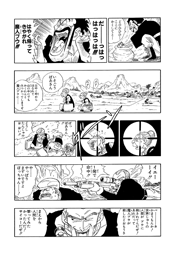 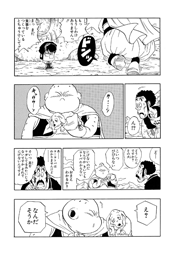 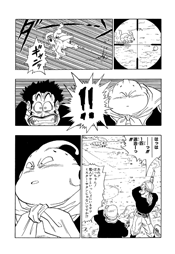