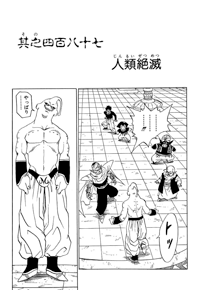 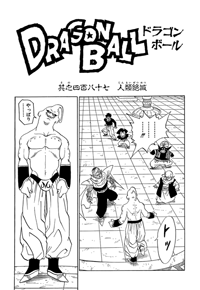 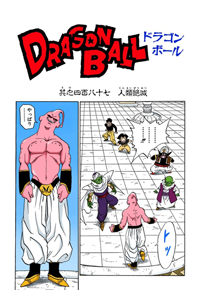 The Extinction of Humanity

Piccolo thinks they’ll be killed, when Boo suddenly screams to bring it out. Piccolo doesn’t understand what he means and asks him to explain. Boo says he wants the guy who was supposed to fight him. He was promised a fight, and he wants to kill him now. The guy must be here, since this is the only place with large powers. Kuririn and Yamcha are frustrated, as the girls all come outside. Piccolo tells him the guy is certainly here, but he’s sleeping in preparation for the fight. Boo says to wake him up, but Piccolo insists he needs more rest to reach full power. Boo thinks about it, and then says he hates waiting.

Piccolo apologizes to the remaining people (in his head), thinking he’ll have to use the Dragon Balls to return them to life. Piccolo tells Boo he can’t fight until Boo kills everyone on Earth, like he said he would. Boo grins, and then starts walking around the edge of the temple, looking down. Suddenly, Boo puts up one hand, and shoots a blast into the air which separates and scatters down to Earth, killing everyone at once. “I killed all the Earthlings. Now, fight. Bring out the guy I’ll fight.” Piccolo hesitantly agrees, but because the fighter is sleeping, he needs time to prepare. Two, no, one hour. “One hour…? How long is that?”

Piccolo magically creates an hour glass, and says when the sand all falls out, it’ll be time. Boo stares at the sand, but doesn’t like this. Piccolo says Mister Satan’s child wants him to wait, pointing over to Videl. Boo looks her way, surprised. “It’s true. She smells the same as Satan. …Okay. I’ll wait. But when time runs out, I’ll kill everyone. Even Satan’s kid.” Piccolo nods, and then walks over to Kuririn. He says they’ll take Trunks and Goten to the Room of Spirit and Time, where they can get fifteen days worth of training in during this hour here. Just using Fusion now is not enough for them to win. Back down on the planet’s surface, not everyone was killed by Boo’s attack. Tenshinhan and Chiaotzu managed to dodge the attacks, and Satan is wandering around with the puppy. 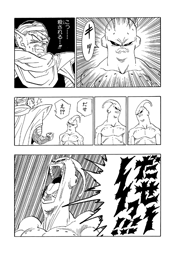 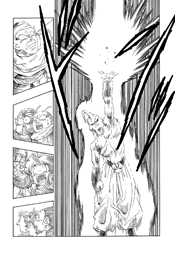 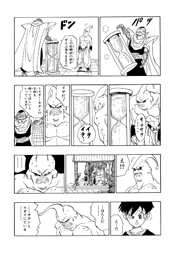