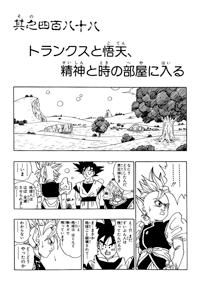 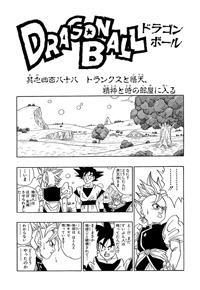 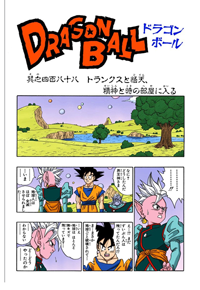 Torankusu to Goten Seishin to Toki no Heya ni Hairu

Trunks and Goten Enter the Room of Spirit and Time

In the Kaiōshin Realm, Kaiōshin notices that everyone on Earth has been killed. Goku can’t believe that, and wonders if the whole Earth was destroyed. Kaiōshin says the Earth is mostly undamaged, but doesn’t know what happened. Gohan can’t hear them, and is getting annoyed, asking if this is over yet. Old Kaiōshin (still reading manga) says no, because Gohan has amazing latent abilities. Gohan stands up and angrily tells him to get his act together, unleashing quite a bit of power in the process and nearly blows everyone away. Gohan prepares to lecture him more, but suddenly stops and wonders if this “boiling up power” is really him. Old Kaiōshin says to sit down, and Gohan nervously apologizes. Goku thinks he’s not just a dirty old man after all, and wonders just how much power Gohan has hidden.

Back at God’s Temple, Boo is starring at the hour glass, as the boys realize he’s changed a lot. Piccolo says he’s changed in every way, not just his form. He tells them to hurry and get into the Room of Spirit and Time; in one minute out here, you can get six hours worth of training in there. Suddenly, Chi-Chi walks out toward Boo, smacks him, and yells at him for killing Gohan. “Become an egg.” Boo turns her into an egg, steps on her, and then goes back to starring at the sand. Goten starts to get angry, but Piccolo yells at him to stay put, because she can be returned to life with the Dragon Balls if they defeat Majin Boo, besides there’s nothing he can do at his current level. Thus, they need to train in the remaining time. Trunks excitedly tells Goten they should train and beat up Majin Boo.

Inside the Room of Spirit and Time, Trunks complains about the bad food and water in here, until Goten starts training in the white space, so Trunks runs out to train too. Some time passes, and Piccolo is silently watching Boo stare at the sand. Videl comes up to Piccolo and asks how Majin Boo knows her father. “It’s simple. Mister Satan is the only human to ever let his guard down around Majin Boo. When we were trying to accomplish things with mere power, Mister Satan, whatever his intentions were, chose to become friends with Majin Boo. As evidence of that, even when every Earthling was killed, Mister Satan was the only person he didn’t kill. Even when he had been changed into a destructive monster like that, those memories still remained. His power can’t compare to ours, but your father really is the pride-filled world champion.”

Boo is getting irritated, and suddenly screams that he won’t wait anymore. He destroys the hourglass, and Piccolo tries to tell him that it hasn’t even been thirty minutes yet. Boo then shoots a hole in the floor, and it goes straight through the temple out into the sky. Boo yells to bring him out, and Piccolo finally relents. Piccolo slowly walks Boo to them, and Kuririn realizes Piccolo probably intends to have Majin Boo fight the boys in the Room of Spirit and Time, away from everyone else. 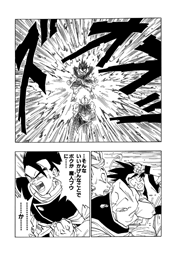 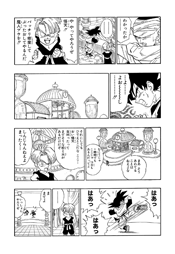 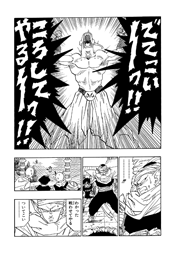