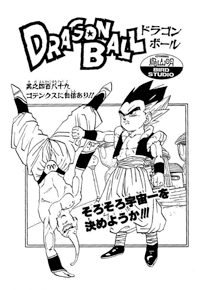 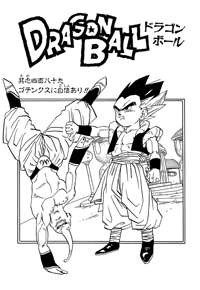 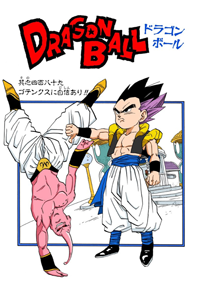 As Piccolo lead Boo to the Room of Spirit and Time, Kuririn wonders why they would be fighting in there. Dende explains that even if Trunks and Goten lose, Piccolo could destroy the door, trapping them there in a different dimension. If Trunks and Goten die, then they can be brought back by the Dragon Balls. Kame-Sen’nin compliments Piccolo’s thinking, as Yamcha wonders why Piccolo’s leading Boo around in circles. Kuririn says probably to buy time, as one minute out here is six hours in there. Boo is getting impatient with all this walking, but Piccolo says his opponent is at the very bottom of this place. Boo protests that they were just going up…

Having been training for quite some time, Trunks and Goten are both very tired. As they catch their breath, they discuss how they’ve “risen over” Super Saiyan, but it’s main weakness is time. They can only stay like that for five minutes, and then their Fusion runs out. Goten thinks they can easily beat him up in five minutes, but Trunks says that’s no fun. Trunks has a better idea: First, they’ll fight in their normal state, and then drag the fight out. They’ll then become “Ultra Super Saiyan” once they get to the remaining five minutes, and easily beat up Boo. That’ll be cool, and they’ll get revenge for Papa, Gohan, and Goten’s mom. As the two celebrate their “brilliant” plan, Piccolo suddenly speaks to them telepathically, talking directly to their hearts.

Piccolo says the schedule for their fight with Majin Boo has changed, and Boo is on his way right now. Goten freaks out and says they’ve just ended a Fusion. Piccolo says it’s okay, because he’s leading Boo around and buying time. There should be plenty of time for them to rest their bodies. It’ll probably be another minute before they reach the door, which gives the boys six hours in there. Trunks thinks six hours is plenty, and Goten tells Piccolo he will be surprised to see how well they’ve trained already. Piccolo asks Boo if he wants to eat some food, but Boo yells and threatens to kill him. The boys sleep, until Piccolo reaches the door.

Boo and Piccolo step inside, and Piccolo waits in the sleeping area as Boo steps out into the open space. Trunks and Goten are there, ready and waiting. They call out to Boo, and Boo asks Piccolo if that’s them. Piccolo hopes for a miracle. Trunks is disappointed Piccolo will be the only spectator. They tell Boo it ends here, putting their thumbs down. Boo is getting irritated, and as they start the Fusion Pose, Boo flies over and punches Trunks. Trunks chastises him that they were obviously about to do something great, and tells Boo to stay put. “Fu…” Piccolo wonders why they’re not starting out as Super Saiyan. “sion… Ha!!!” However, Piccolo is at least glad they’ve perfected fusing.

Gotenks appears in a flash of light, and Boo remembers beating him up earlier. Gotenks insists that he’s completely different from before, and Piccolo agrees that he does seem different. Gotenks flies over and kicks Boo, pummels him, and then Boo asks if he can attack now. Gotenks says to wait, and thinks Boo must be pretending to be unaffected. Piccolo thinks they’re doomed… 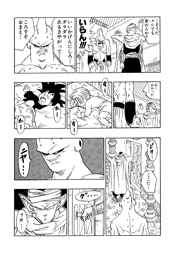 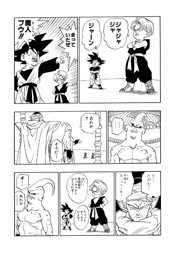 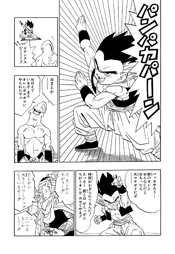