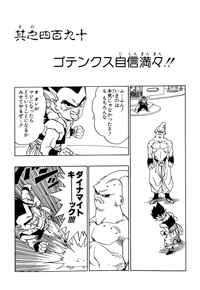 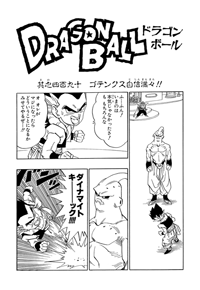 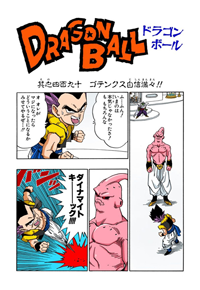 Gotenks’ Got Loads of Confidence!!

Gotenks insists he hasn’t gotten serious yet, but he’ll show Boo what he can really do now. Gotenks rushes at Boo and proceeds to unleash numerous ridiculously named generic attacks. Irritated, Boo backhands Gotenks and sends him flying, and Piccolo puts his hands over his eyes in disgust. Gotenks says Boo is very tough, but insists he had calculated that. Boo says he’s very weak, so this is no fun and he’ll just kill him now. Gotenks mutters that Boo just doesn’t understand what is going on at all… Now Boo will regret having made him angry! “Super Saiyan!!!!!” Piccolo is amazed he is now able to become a Super Saiyan after Fusion.

Gotenks says he’ll end this, but wonders which of his many techniques to use. Boo will die in one shot from this, but oh well. “Galactic Donut!!!!” Gotenks forms a small ring of ki, and sends it to hover above Boo. He widens the ring, lowers it to surround Boo, and then finally collapses the ring tight around Boo. Piccolo is really excited to see this technique work, as Boo screams, struggling to get free. Boo suddenly stops screaming, jokingly says “Not”, and easily busts free. Gotenks is baffled, as Boo flies over toward him. Gotenks jumps over Boo’s attack, but Boo kicks him high into the air, and then flies up with him. Boo backflips and kicks Gotenks toward the ground, and then dives down after him. Gotenks kicks off the ground, heading back up toward Boo. The two collide mid-air with a massive head butt. Boo is finally hurt, but so is Gotenks, who gives Boo the middle finger. Gotenks says he’ll really end things now, and Piccolo starts to think he might actually do it. “Take this!!! And then disappear from this world!!! My thought-out, specialized great technique!!!! Super Ghost Kamikaze Attack!!!!” Gotenks charges up a bit, and then spits out a ghost. “Hi, I’m a ghost~” 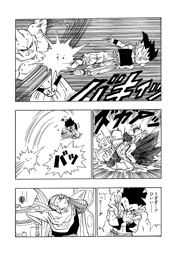 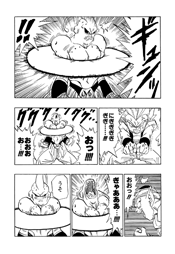 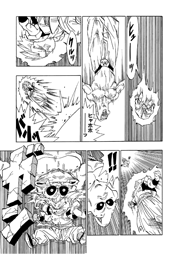