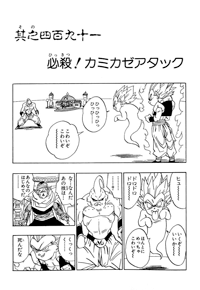 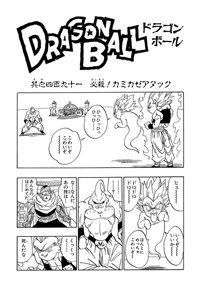 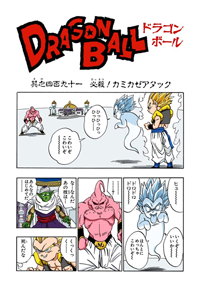 “Heeheehee, I’m so scary, I’m so scary~ Here I go, okay~ I’m really quite scary~”, says the ghost. Boo is just confused, while Piccolo wonders what the Hell this is. Gotenks says Boo is dead now, and commands the ghost to do it. The ghost flies straight at Boo, and Boo easily backhands it. But, upon impact, the ghost explodes. Boo is all messed up, his body looking really contorted, and Gotenks excitedly explains that even slightly touching the ghost creates a huge explosion. Piccolo yells to hurry and finish off Boo. “Super Ghost Kamikaze Attack Ten-Ghosts-Together Finish!!!!” Gotenks spits out ten ghosts, all of which goof off a bit. Gotenks tells them to all fall in line, and face forward. Two of the ghosts begin arguing, and Gotenks yells at them to obey. Each ghost then shouts out their a number.

Piccolo interrupts him, saying that Majin Boo has already returned to normal. Gotenks is ticked off that Boo’s taking all this so lightly, just sitting there drinking cream soda (and reading a car magazine). Gotenks calls him out, and so Boo stands up with his soda. Gotenks sends #1 and #2 at Boo, but Boo flies up at the last second, and the ghosts crash into each other. Boo sticks his tongue out and says he won’t fall for the same trick twice. Gotenks calls for a huddle with the ghosts, and once they have a new plan, two ghosts high five each other and blow each other up. Gotenks says because of those two stupid ghosts, everyone but #10 should go along with the plan. Five of the ghosts fly at Boo, who readies himself, but then the ghosts stop and gather around something on the ground. The ghosts loudly wonder what this weird thing is, and Boo curiously creeps over to look at it. The five of them then jump at Boo, exploding and leaving Boo a gooey mess once again. Gotenks tells #10 to finish it by blowing up in Boo’s mouth, which #10 does, and boom! Gotenks strikes a cool looking pose and gives two victory signs, saying it’s all over. 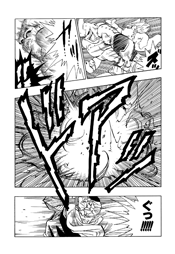 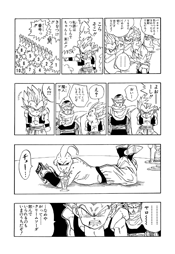 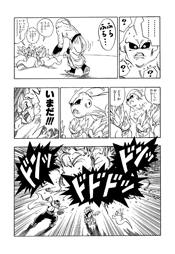