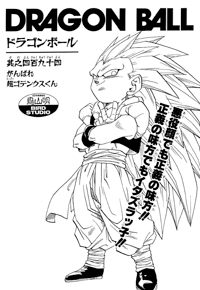 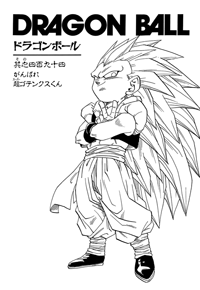 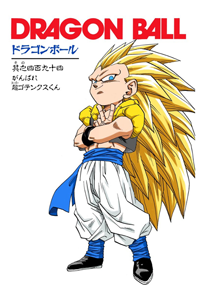 Do Your Best, Super Gotenks-kun

Gotenks flies at Boo, headbutting him straight through the temple’s main structure and out into mid-air, surprising Boo. Gotenks comes at him again and Boo just barely manages to dodge a punch, and then grabs Gotenks’ fist and slings him around. He tosses Gotenks through the temple floor, knocking off a big chunk of it. Boo screams out with rage, as Gotenks laughs at how mad he is and Piccolo laments over the temple’s destruction. Boo curls himself up into a ball, and comes flying toward them. Gotenks dodges, and so Boo shoots straight through the temple floor out into the air again. Boo continues doing this, until the temple is completely destroyed, aside from the floor below them. Gotenks prepares to counter, but Boo busts up their remaining floor from underneath as he does his poses. Piccolo yells at Gotenks to just do it without posing. Gotenks disappointedly obeys and fires his Rapid-Fire Super Donut attack at Boo.

Gotenks shoots out a bunch of donuts, which surround Boo and trap him into a ball. Piccolo excitedly thinks Majin Boo has been sealed away, but Gotenks says he’ll break free soon, so they’ll just damage him now. “Clash Ultra Boo-Boo Volleyball!!!!” Gotenks wants Piccolo to help, and instructs him to say “Okay!” after he says “Here I go!” Piccolo reluctantly agrees. Gotenks says, “Here I go!”, and Piccolo responds with “Okay!” Gotenks passes, Piccolo tosses, and Gotenks attacks, spiking the Boo volleyball down toward the Earth. Piccolo realizes he wasn’t much help after all. Gotenks flies down after Boo, and notices that he’s left a large crater in the Earth, as though a meteorite had crashed own, and laughs. 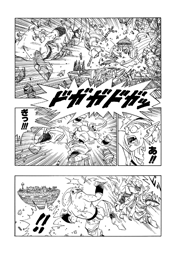 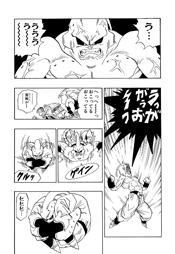