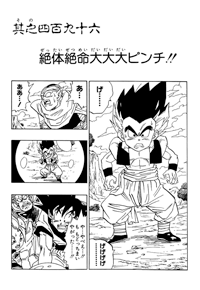 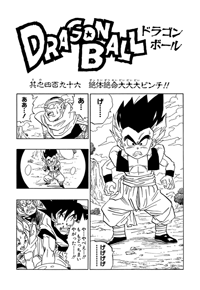 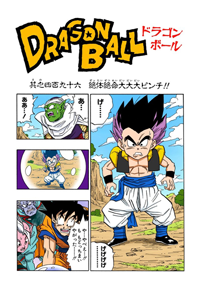 Boo begins recovering from his injuries, as Gotenks nervously laughs. Piccolo thinks it’s really all over now. Back in the Kaiōshin Realm, Goku asks Old Kaiōshin to please hurry, since the youngsters have powered down from Fusion. Old Kaiōshin says he can go, he’s been done for about five minutes now. Gohan asks why he didn’t say so sooner, and the old man says it was more dramatic this way. Gohan realizes he has to hurry, and asks how to become that warrior of ultimate strength. Old Kaiōshin says it’s essentially like transforming into that “Super Whatever” and focusing a kiai. Gohan concentrates, and unleashes his power, nearly blowing everyone away.

Gohan hasn’t changed much, visually, and Goku is amazed that he isn’t even Super Saiyan. Kaiōshin says they need to hurry to the Earth, but Kibito says he’ll take Gohan alone. The two of them would just get in this incredible savior’s way, and Kibito intends to leave right after he takes Gohan. Goku feels bad that he can’t take Gohan himself. He says they’ll never meet again, until Gohan comes to the afterlife for good. Goku tells him good luck, beat up Boo, and then they hug. Kibito teleports away with Gohan, and Old Kaiōshin scoffs that he didn’t even get a thank you for all he’s done.

On Earth, Gohan has a favor to ask of Kibito: he wants different clothes. He wants to fight in the same dōgi as his father. Kibito says that’s a simple thing, and asks if the color was the same as the excrement of the frogs on Planet Popole. Gohan says it was a “golden yellow” color, and in a flash it’s done. Kibito says he’ll be praying for him from the Kaiōshin Realm, and Gohan says to give his regards to the two Kaiōshin. Kibito teleports away, and Gohan flies off. Trunks and Goten are no longer fused, and rightfully thinking they’ll be killed now. Piccolo says he’ll fight with them, although it won’t do much good anyway. Boo suddenly sits down and starts to nap, and Piccolo wonders why. The four of them then feel a great ki headed their way. 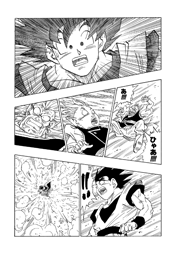 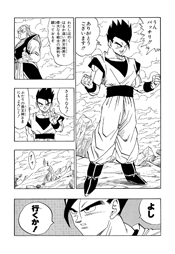 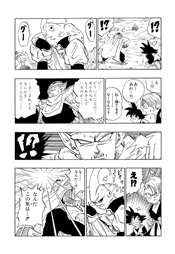