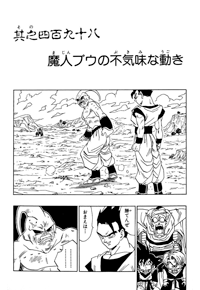 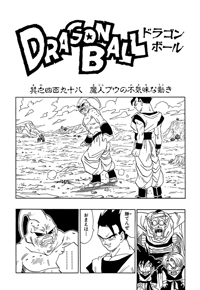 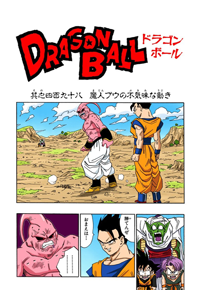 Boo is shocked, and Gohan confidentially says he can’t win. Boo realizes it was him after all, but Gohan doesn’t know what he means. Boo had felt a strong power very far away, but he can’t allow anyone to be stronger than him. Boo screams that he won’t allow Gohan to get away with this, and he’ll kill him. Gohan says Boo knows that’s futile, but Boo merely grins and starts charging up. Gohan suddenly realizes what he’s doing and quickly flies away with Piccolo and the boys as Boo self-destructs. The group lands on a far off cliff overlooking the destruction, where Gohan says that Boo didn’t die when he self-destructed, nor was he trying to kill Gohan with it. Piccolo can’t feel his ki at all, and Gohan says he’s hiding it. Goten suspects a sneak attack, but Gohan figures he must be planning something.

Trunks figures even if Boo is alive, Gohan can easily take care of him. Goten says he’s even stronger than their Super Gotenks, and Trunks admits maybe a little. Piccolo asks Gohan how he even got this strong, and Gohan says it’s because of an awesome old guy. Gohan then wants to know who has the Dragon Radar, and Trunks say that Piccolo has it. Piccolo says Dende’s dead, but Gohan points out a faint ki he sensed, Dende’s. The four of them fly off toward Dende, and along the way they spot someone else. Mister Satan, who wants a beer, or at least water, is walking through the desert with the puppy. Trunks wants to leave him, but Piccolo thinks they should bring him along. Piccolo carries Satan, and Goten carries the puppy.

Piccolo wonders why Dende alone would have survived, since Boo had plenty of time to kill him. Gohan says Piccolo and Gotenks left the Room of Spirit and Time almost immediately after Boo did, so Boo probably didn’t have much time. Piccolo realizes he’d gotten mixed up, and it had only been ten seconds in this dimension. Piccolo drops Satan as he gets excited, but Trunks catches him. Soon enough they spot Dende, who is excited to see everyone. Dende explains that Mister Popo threw him down when Boo came back, since he must live, and Piccolo thinks Mister Popo did well. Satan wonders about this brat with the odd complexion, but Trunks says he’s God. Goku is relieved, while Kaiōshin wonders about these Dragon Ball things. Back on Earth, Satan has learned that Videl was killed, but Goten reassures him that she can be brought back. Satan threatens Goten, saying he’ll make him swallow a thousand needles if he’s lying. They suddenly feel Majin Boo approaching, and Gohan is curious to see what he’s come up with in the last hour. 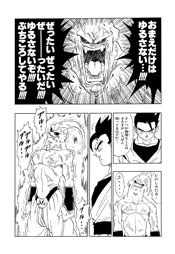 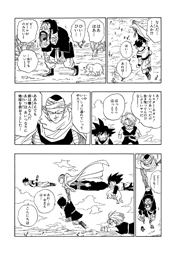 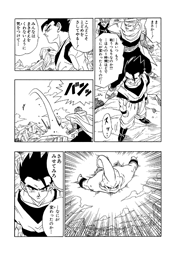