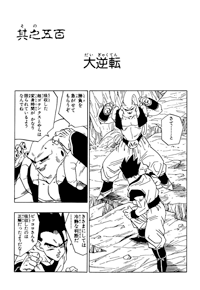 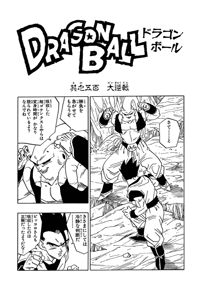 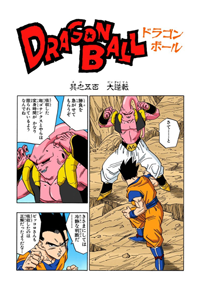 Boo wants to make this fight quick, because of Super Gotenks’ time limit. Gohan thinks Boo was right to absorb Piccolo as well. Gohan kicks at Boo, but Boo catches his leg. Gohan tries with the other leg, but Boo grabs that as well, and Gohan is just hanging there. Gohan shoots a blast with his hand, but Boo leans his head back and dodges it. From there, Boo sends his forelock up between his own legs, so that it grabs Gohan around the neck. He then drags Gohan between his legs, so that Gohan and Boo are now back to back. Boo then faces backwards and punches Gohan off into the distance, followed by a huge blast, but Gohan just barely manages to jump out of the way.

Boo flies over to Gohan, and taunts him, which angers Gohan. Gohan flies at Boo with a kick, but Boo dodges it by leaning back. He leans so far back that he does a complete somersault, kicking Gohan up into the air. Boo then fires Gotenks’ Rapid-Fire Super Donut, tying Gohan up, and Boo laughs, asking what if feels like to be done in by a friend’s technique. In the Kaiōshin Realm, Goku thinks Gohan will be killed for sure. Old Kaiōshin says he hadn’t calculated this would happen, and tells Son Goku to go help. Goku says he can’t go back to the living world anymore. Old Kaiōshin realizes this, and says he’ll give his own life so that Goku can live. Kibito protests giving his life to a mortal, but the old man says Majin Boo will certainly come here otherwise. Kaiōshin volunteers instead, but Old Kaiōshin says he’s still young, while he only has about a thousand years left.

Boo prepares to use another of their techniques, the Kamehameha, and Gohan breaks free of the donuts just in time to dodge it. Boo is annoyed at his persistence. Meanwhile, back in the afterlife, Enma-daiō comments that he had left this particular soul alone just in case something like this were to happen, and since it has, he’s gone and even given him a body again. Enma-daiō instructs him to go to Earth and help, and he’ll have Uranai Baba take him there. Baba understands. Vegeta smirks, thinking it’s funny they’d ask a villain like him to help, even if he only provides a faint hope of defeating Majin Boo.

Old Kaiōshin says farewell, and then keels over. Goku’s halo disappears, and he promises not to waste this life. Old Kaiōshin suddenly sits up again, sporting a halo, saying to hurry so that he hasn’t died in vain. Meanwhile, Boo continues mocking Gohan’s persistence to live. 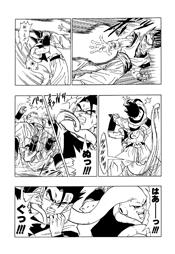 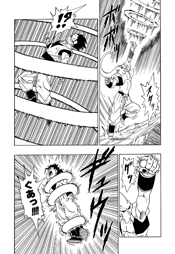 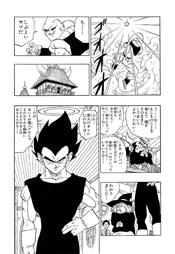