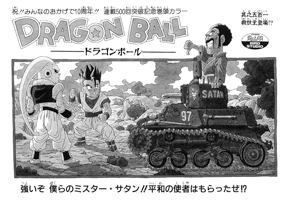 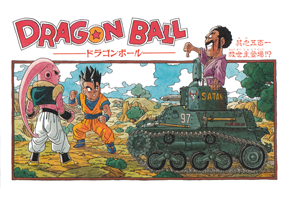 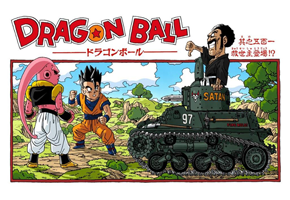 Boo thinks Gohan is getting really weak, which prompts Gohan to fly at him with a punch, though Boo easily dodges it and elbows Gohan into the ground. Gohan fires a blast back up at Boo, but he quickly puts his hands together and slams the blast back toward Gohan. The blast shoots straight through the ground and flies out into space on the other side of the planet. Gohan is still down in the hole, and Boo flies in after him. Boo estimates he has about ten minutes left, and he really wants to make them fun. Dende tells Mister Satan to take the dog and get out of here, but Satan says the champion can’t do such a thing. Satan pulls out his 45 caliber and says he’ll blast Boo away with this. Dende is speechless…

Back in the Kaiōshin Realm Goku prepares to teleport away, but Old Kaiōshin tells him to wait. He asks Goku just how he plans on beating Boo. Goku suddenly gets the idea to use Fusion with Gohan. Old Kaiōshin doubts Boo would just stand there and wait for them to do the poses for that, and Goku asks why he had even said to go and beat up Boo in the first place then. Old Kaiōshin takes off his earrings, and tells Goku to put one of these Potara on his left ear. Then have Gohan put the other Potara on his right ear, and they’ll fuse. But this is better than Fusion, and the Potara are an ancient treasure of the Kaiōshin. He wants the younger Kaiōshin to test it out using his own Potara with Kibito. Kibito and Kaiōshin each put on a Potara, and, suddenly…

Gohan suddenly comes crashing out of the ground and lands hard, looking pretty damaged. Dende flies over toward him and quickly heals him, just before Boo comes flying out of the ground himself. Boo prepares to finish off Gohan, until he notices him standing up and fully healed again. Boo notes that Gohan has been restored, but he hasn’t powered up much. Boo hits Gohan with a kiai shockwave, and then fires a blast at Dende. Satan fires his 45 at the blast, and it works! Well, in actuality, we see a pair of hands in a Kikōhō formation. Tenshinhan has arrived, and says he barely recognizes Son Gohan. Majin Boo has changed as well. Boo says another pitiful small fry has arrived, but a small fry is still a small fry.

Kaiōshin and Kibito have now fused, generally looking just like a taller Kaiōshin with long straight hair. Kaiōshin gets excited at his power boost and claims he can fight too, but Old Kaiōshin bursts his bubble. Goku thinks that’s awesome and asks how long the fusion lasts. Old Kaiōshin says the potara fusion last forever. Kaiōshin isn’t so thrilled now. Goku thinks that that stinks, but there’s no way around it. When things are peaceful, he’ll have to go to Gohan’s school and whatnot. The old man tells him to hurry before Gohan dies, and so Goku prepares to teleport away. Boo has formed a large ball over his head and prepares to kill them all away. Tenshinhan thinks Boo is dimensions ahead of him, as Satan aims his gun to take out Boo… 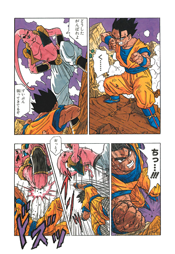 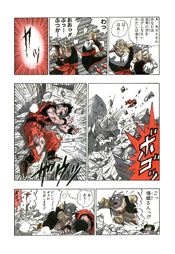 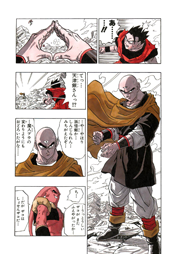