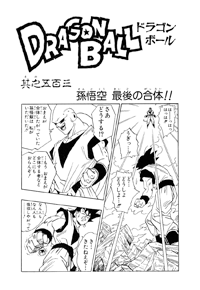 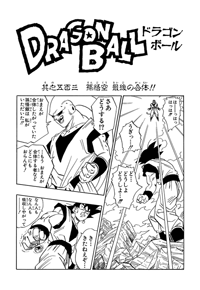 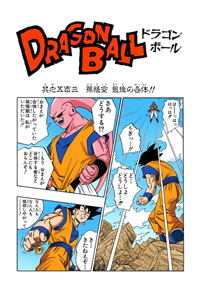 Boo laughs, saying there’s no one left for him to fuse with, and Goku realizes his only choice is Mister Satan. Satan, who is hiding behind a rock, turns to Dende and says that Majin Boo is somehow still alive, but he’s all out of bullets. Dende unenthusiastically says, “Is that so…” Boo, in his infinite generosity, is going to grant Goku five seconds to pick someone to fuse with. “Satan is no good… With a power of 1000, I’d become 1001, and that can’t possibly win… Or rather, would I get weaker than I am now…?!” Goku’s time is up, and so he yells at Satan to get ready. He prepares to toss the Potara to Satan, but he suddenly feels a familiar ki off in the distance. “…Vegeta……?!!!!” Uranai Baba tells Vegeta this is as far as she can bring him, because she’s scared. Boo rushes as Goku, who teleports away just as Boo punches at him.

Goku is elated that it really is Vegeta, while Vegeta is surprised to see him at all, as is Baba. Boo doesn’t care whether Goku’s gone to the bottom of the Earth, or another planet, or anywhere, he’ll track him down no matter what. Boo then flies off, leaving Satan and Dende in a cloud of dust. Dende says he’s going to follow them, and Satan begs him to bring him along. Meanwhile, Baba asks how Goku is alive again, but Goku says there’s no time to explain and she needs to leave right away. Baba takes the hint and quickly flies off; they’ll talk later. Goku then asks Vegeta to put the Potara on his right ear. Vegeta asks why, and Goku explains that they’ll fuse and become a warrior with incredible power. Goku insists this is the only way to defeat Boo, but Vegeta is reluctant.

Boo feels another large power, but still doubts they’d even be much of an adversary fused. Goku says Boo is getting closer, and begs Vegeta to put on the Potara. But Vegeta yells at Goku for holding back and not using Super Saiyan 3 during their fight. Goku insists that that transformation was time-limited, but then gets angry himself and asks Vegeta if he also knows that Boo killed everyone, including Bulma, and then Piccolo, Gohan, Goten, and Trunks were all absorbed. Vegeta hesitates as Boo gets very close, but then finally asks for the Potara. Goku tosses it to him and he starts putting it on his right ear. Boo spots the two and prepares to throw a ki attack at them. Vegeta just about has the earring on and Goku decides to mention that they’ll be permanently fused. “Da… Dammit..!!!” But Vegeta has it on, and Goku thanks him. The two fly at each each, and then there’s a large flash of light… A shocked Boo stops dead in his tracks, still holding his ki attack, as a new warrior greets him! 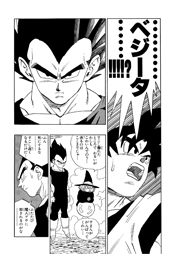 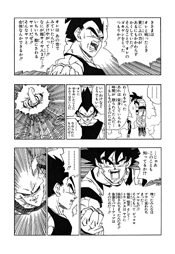 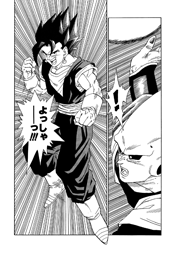