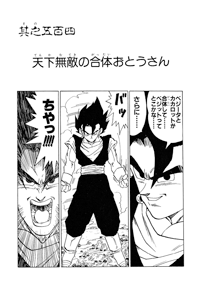 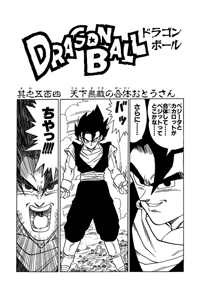 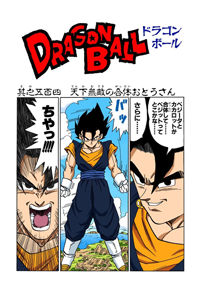 The Fused Fathers are Unbeatable

“Vegeta and Kakarrot fused… You could call it ‘Vegetto’. But beyond that… This is Super Vegetto!!” Boo finally regains his composure and launches his ki attack at Vegetto, but he easily hits it right back at Boo. Boo just manages to duck out of the way at the last second by retracting his head into his neck. Boo chuckles, thinking that was nothing big, and flies at Vegetto with a punch, but Vegetto kicks Boo hard in the face, busting his nose. Vegetto mocks him, saying Boo probably wishes he still didn’t have a nose. Boo says he’s going to die a painful death, but Vegetto just punches Boo really hard in the face.

Boo kicks at Vegetto, but Vegetto catches his leg, and then slams Boo down into the ground. Kaiōshin says Boo is helpless, and the Potara are amazing. Old Kaiōshin corrects him that it’s because those two experts are fused, and even more so because they’re rivals. Back on Earth, Vegetto shoots a ki saber toward the ground, and uses it to impale Boo, raising him back into the air. Vegetto asks him to get a little more serious, but Boo merely glares at him. Vegetto wonders out loud if Boo really had been serious, and apologizes if that’s so. Boo slides himself off the sword, and begins steaming up with anger. There is so much steam that the two become completely engulfed in it, but they can be heard fighting inside. As the smoke clears, Boo is all busted up, and Vegetto is holding Boo’s forelock in his hand. Vegetto tosses the forelock into the air, blasting it into dust. He’ll do this to Boo’s whole body, and cleanly erase him from this world. Old Kaiōshin is angry that he’s just playing around, while Boo is completely enraged. 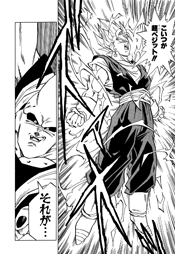 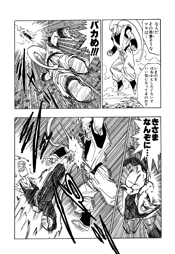 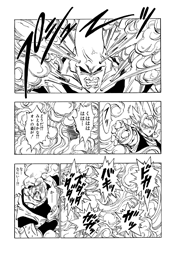