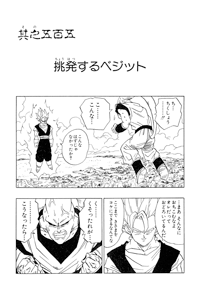 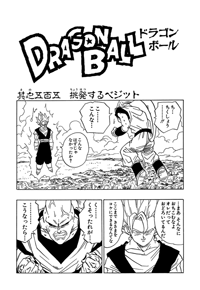 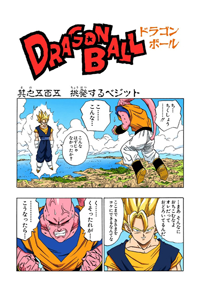 Boo can’t believe this, and Vegetto agrees, saying he can’t believe it himself either. Boo starts shaking, looking a bit constipated, and then begins spitting out little ghosts with Boo’s head. Boo announces Super Ghost Kamikaze Attack and Vegetto recognizes it as the absorbed Gotenks’ technique. Boo sends the ghosts toward Vegetto, but Vegetto vanishes. He reappears off to the side and throws small blasts at the ghosts, blowing them all up. Vegetto taunts Boo, saying how easy that was since the technique was thought up by a kid. Boo screams in frustration, as Old Kaiōshin wishes Vegetto would just finish the job and stop fooling around. Vegetto wants Boo to get serious, and so Boo angrily comes flying at him, saying it was unfair to fuse. Vegetto comments that Boo’s fused with lots of people, as he holds off Boo’s strikes with only his feet.

Dende is flying along, holding Satan, and Dende can hear the sounds of the battle off in the distance. Back at the battle, Vegetto kicks Boo square in the face, and Boo glares back at him in disgust. Vegetto tells Boo that he can’t win at all, but Boo smirks, asking if he likes coffee candy. Boo suddenly zaps Vegetto, and he becomes a candy ball. Boo holds the candy in his hand and gleefully laughs. Kaiōshin can’t believe this, while Old Kaiōshin yells at those idiots for goofing around too much. Boo holds the candy ball out in a fist, saying he’s finally done it, but then he suddenly punches himself in the face. He drops the candy from his fist, and it floats there talking to him. Vegetto says his strength hasn’t changed, and proclaims himself the strongest candy ball in the universe. On top of that, he’s smaller, and harder to hit now. The Vegetto candy ball flies at Boo, hitting him in the stomach and face. Boo swats at him, but keeps missing, as the ball repeatedly slams into him, knocking Boo around.

Vegetto then flies through Boo’s mouth and out the back of his head, cutting off a chunk of his forelock. Boo finally concedes and returns Vegetto back to normal. The Kaiōshin really hope Vegetto will stop goofing around. Vegetto supposes he should finally end this, so he’ll give Boo until the count of ten. “1… 2… 3… 4…” Thinking to himself, Vegetto hopes Boo will hurry up and realize something. “5…” Boo thinks he has to absorb him, but how… He remembers his piece of forelock that was cut off by the candy, and suddenly turns it into a blob. “7… 8…” Vegetto is glad he’s finally realized it, thinking how he cut that piece off on purpose. “9…” Vegetto hopes this will work. “10!!” The blob starts to envelop Vegetto, but he quickly puts up a barrier. Boo brings the blob back to himself, absorbing it into his body, and is pleased with his idea. 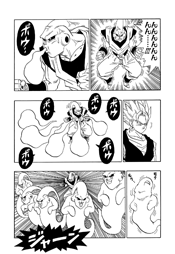 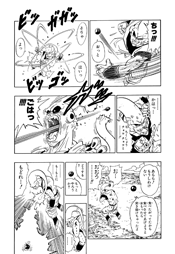 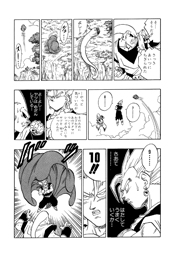