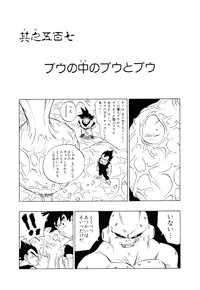 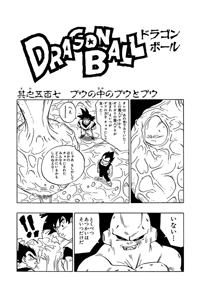 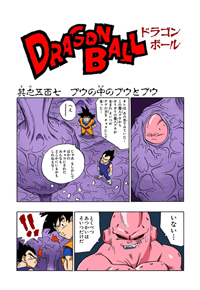 Boo and Boo Inside of Boo

Vegeta says he had also seen this from the afterlife, and explains to Goku that this fat Boo had been turned into chocolate and eaten. Goku wonders if the other people who were turned into chocolate and eaten are in here somewhere, too. Suddenly a voice comes from behind them. “They’re not. He alone received special treatment.” The two turn in horror to see that the Boo they’re inside has formed within himself, and Vegeta wonders how that’s possible. Boo doesn’t know why they weren’t absorbed, but he’s mad they’ve disconnected all the other absorbed people. Vegeta thinks is bad. Goku says that’s why they should have kept the Potara and fused again outside for an easy victory. Boo is pleased to hear they can’t fuse again, and Vegeta tells Goku he’s an idiot for saying that. Boo forms a full body and prepares to fight, so the two of them turn Super Saiyan.

Goku threatens to blow a huge hole in Boo’s body, but Boo is unconcerned, and so Goku does so. Meanwhile, Dende approaches with Satan and the puppy, and says he can feel Majin Boo’s ki. Satan wonders what he means about Majin Boo’s “tree”. They quickly duck behind some bushes, and watch as Boo is standing motionless on top of a cliff, and wonder why his form has changed back. Inside, Goku’s blast was ineffective. Boo explains that he felt a little something in his head, since they’re all the size of fleas. Goku says they’ll have to find another way to defeat him, but Boo says that’s impossible.

Vegeta has another idea though. He asks Boo what would happen if he cut this other Boo’s pod free, wondering whether Boo would revert back to the fat one or the thin one. Either way, his power will certainly drop. Boo begs him to stop, and says, “I won’t be me!!” Goku wonders what he means by that, while Vegeta is quite intrigued to find out now. Boo rushes at Vegeta, but Vegeta cuts the pod free first. The inner Boo collapses, and oozes away, as the outer Boo begins screaming in agony. Vegeta says they need to grab everyone and get out of here, and so they carry two pods each, leaving the Boo pod is behind, and fly through Boo until they come to one of the steam holes in Boo’s head. Outside, they all return to normal size, but everyone else is still unconscious. Boo still hasn’t noticed their escape, as Dende is impressed they rescued the absorbed people. Boo begins bulking up, and Goku points out that his ki is actually increasing now. 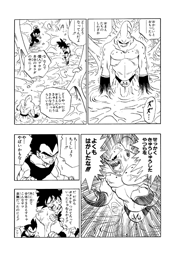 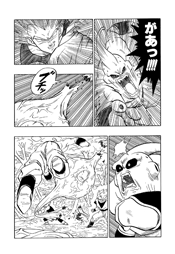 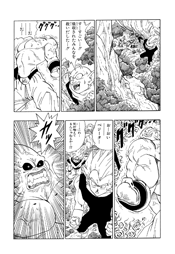