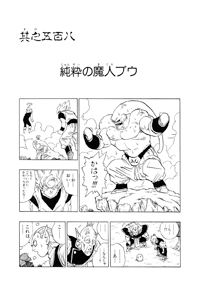 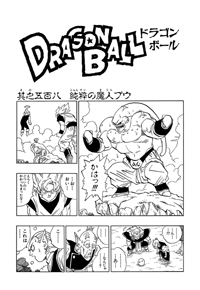 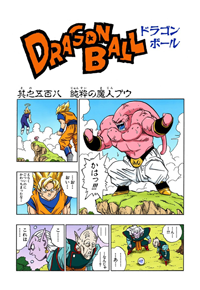 Goku feels weird about Boo’s change, but Vegeta says he’s not done yet, he’s still changing. Kaiōshin begins freaking out when he realizes that Boo is reverting. Boo finally stops yelling, and has shrunk down to a small, child-like form. Goku and Vegeta figure this runt should be no problem. Kaiōshin can’t believe it, and Old Kaiōshin wants to know what exactly is going on. “In my time, there were five Kaiōshin… Until the Mage Bibbidi’s creation, Majin Boo, defeated us… I was the youngest and least powerful, but somehow I was saved, with merely a severe injury… But, four were taken by Boo’s hand… First, two were killed. North Kaiōshin and West Kaiōshin. …And then, there was the toughest and strongest, South Kaiōshin. …Somehow he was absorbed by Boo.”

Old Kaiōshin asks if that was the huge Boo from before. “Yes. …The next one who was absorbed was the fat, but gentle and mild-mannered Dai Kaiōshin. …The Majin Boo that Bibbidi created was pure evil. He was a failure that Bibbidi himself couldn’t even handle, but once Dai Kaiōshin was absorbed, it seems he became able to control him.” Old Kaiōshin assumes that this must be the original, very first, and most troublesome Boo. “Yes. …He had gained a heart because of the absorptions, which got to the point that it reduced his power, and so now he has once again reverted back to his original form. Absolutely without self-control and mind… An incarnation of evil itself…”

Boo suddenly screams, and everyone covers their ears, with Goku wondering what he’s doing. Boo then calms down and fires a blast at the planet. Vegeta quickly fires his own blast to knock it away, just in the nick of time. Goku is shocked Boo did that, and thanks Vegeta. Vegeta thinks Boo would’ve blown himself up with that, but Goku says that Boo can restore himself even when he’s been busted into tiny pieces. Vegeta challenges Boo, saying he should come and fight them, but Boo just ignores him, and then makes a wicked grin. Boo creates a large energy ball over his head, and Goku says there’s no way they can deflect something that huge. Old Kaiōshin tells Kaiōshin to go give his Potara to them. Goku begs Boo to stop, and tries to convince him that fighting them is better than blowing up the Earth.

Goku calls Vegeta over and says he’ll use Shunkan-Idō with everyone. Goku suddenly spots Dende, Mister Satan, and the puppy, all with pitiful faces, and so he flies down and grabs them. There’s no time to get the others though, and Goku realizes there’s not even time to teleport away. Suddenly, Kaiōshin appears, and takes their hands. Vegeta notices Piccolo, Gohan, Trunks, and Goten still on the ground. In a flash, the Earth explodes. But, Kaiōshin arrives in the Kaiōshin Realm with Goku, Vegeta, Satan, Dende, and the puppy. The old guy celebrates that they made it in time, but Goku says they weren’t in time to save the Earth or Gohan and the others. Satan wonders if this is Heaven. “Damn you, Kakarrot… Why the Hell did you save these guys and the dog over Trunks and the others…?!” 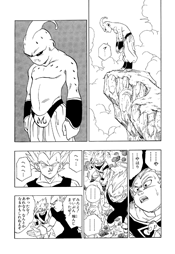 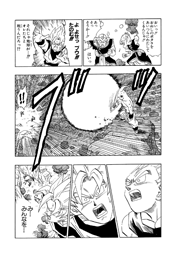 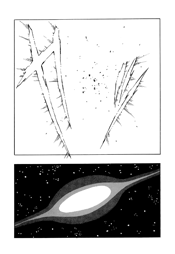