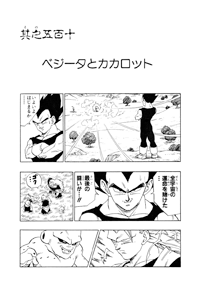 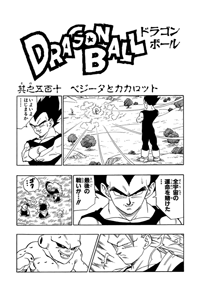 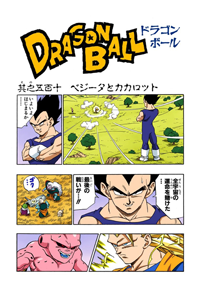 Vegeta starts up a narration. “So it’s begun at last… The final battle, with the fate of the entire universe at stake…!!” Boo flies at Goku, but Goku fires a Kamehameha, obliterating Boo from the waist down. Boo quickly restores himself, but immediately afterwards, Goku gets behind him and knocks him down toward the ground. Boo blows himself into a parachute shape so that he lands safely, and Goku lands too. Goku rushes forward, as Boo drives his own leg into the ground. Boo’s leg comes back out of the ground just in front of Goku, kicking him in the face. Goku does multiple backflips to get away from the leg, as it keeps trying to kick him. Boo fires a huge blast at Goku, but Goku teleports away, and kicks Boo in the face. Boo then elbows Goku, and they begin exchanging a flurry of blows.

“Kakarrot… An amazing guy, you are… That Majin Boo, he was an opponent I couldn’t stand up to at all… The only one who can fight him is you… I have a hunch that you somehow know it… Why is it that I, who should be a genius, am unable to compete with you…” Boo kicks Goku. “I thought it was because you had things you wanted to protect…” Goku hits Boo with a light blast. “I thought your strong will to protect brought forth mysterious powers… I think that was certainly there, but now I have that same thing… I fought for the sake of my way of thinking, for my pleasure, for killing my enemies, and for my pride…” Boo bites Goku’s arm.

“But, he’s different… He doesn’t fight to win. He fights so that he absolutely won’t lose, continually overcoming his limits…! That’s why he’s unconcerned with taking his opponent’s lives… He didn’t even kill me…” Goku locks Boo in a headlock and bites him on the head. “As though he completely knew that I would come to be a person with a bit of a heart for people as I am now… It pisses me off…!” Boo tries to zap Goku with his forelock, but Goku jumps over it. “To think, a gentle Saiyan who loves fighting…!!” Goku blasts Boo. “Give it your best, Kakarrot… You’re number one!!”

Goku shields himself against a large Kamehameha from Boo, and Satan thinks this is a really intense dream. Boo thinks he’s won, when suddenly another Kamehameha shoots up from the smoke, and blows Boo to smithereens. When the smoke clears, it’s Goku, who says, “Dumbass!! This was a real Kamehameha!!” Goku is mad that Boo’s physical strength never drops no matter what you do to him, and he can always return to a new state. Vegeta goes over to Goku, and Goku hopes it’s not time to switch off. Vegeta says he never intended to fight anyway. Vegeta says Boo is certainly strong beyond imagination, but so is Kakarrot. He tells him to go all out and finish Boo. Goku had thought he could, but he hasn’t gotten the chance yet. He needs a minute to gather his ki. Goku wishes they hadn’t destroyed the Potara. Boo begins to reform again, mocking them, and so Vegeta says he’ll give him that one minute he needs. 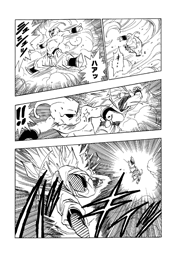 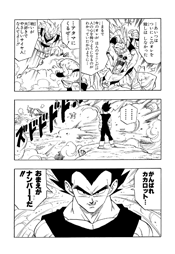 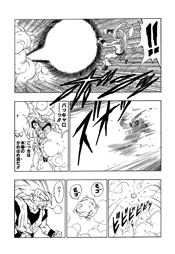