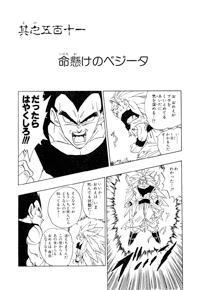 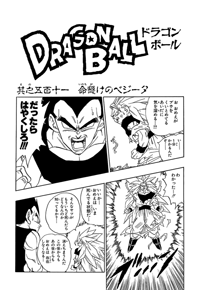 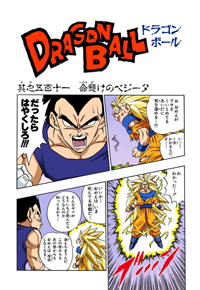 Vegeta Puts His Life on the Line

Goku warns Vegeta that since he’s dead he can’t die again, or else he’ll disappear from both the living world and the afterlife, and cease to exist at all. Vegeta powers up to Super Saiyan 2 and flies over toward Boo, starting out with a huge ki blast that destroys Boo from the waist down. Vegeta then lets off a flurry of blasts, and Goku thinks he’ll definitely have his one minute at this rate. As Vegeta is still letting off his flurry of blasts, Boo reforms behind him and knocks Vegeta down to the ground, hard. Vegeta holds his head in pain, which is bleeding a bit, but Boo comes over and kicks him into the air, then punches Vegeta once, twice, a headbutt, and then pummels him. Vegeta can’t believe how incredibly fast and hard Boo’s attacks are, and that Kakarrot was able to fight someone like this.

Goku hopes Vegeta can hold out, but he apparently can’t. Goku says it’s already been more than a minute, but he still can’t wipe out Boo. Boo kicks Vegeta and sends him flying, then stretches out his arm and wraps it around Vegeta’s neck. Vegeta is choking, and Goku has no idea what to do. Suddenly though, Satan calls Boo out. He delivers a lengthy promo about being the World Fighting Champion. Boo drops Vegeta, and turns his attention to Satan. Boo flies toward him, preparing to attack, and Satan is scared, even though this is a dream. Satan ducks and covers, and Boo misses him. Goku is kind of impressed with Satan. Boo suddenly stops, looking like he’s in extreme pain, and begins clutching his head. Satan figures Boo is afraid, and begins laughing. 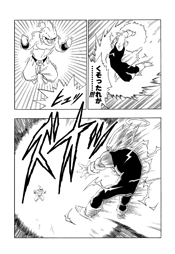 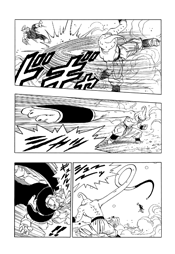 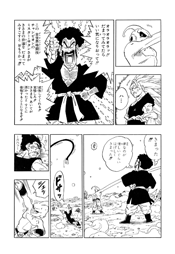