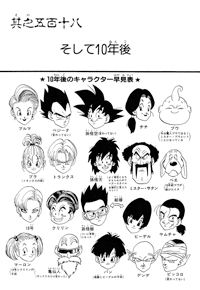 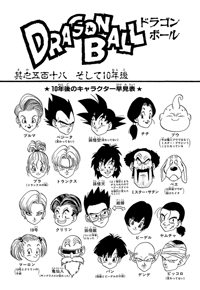 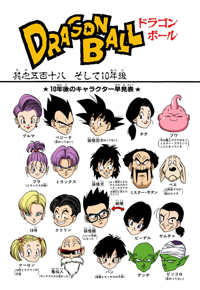 In the backyard, Goten is exhausted. Goku tells Bulma and Vegeta it’s been a while, and Bulma says it hasn’t just been a while; if she left him alone, they’d never see each other. Goku says they just saw each other five years ago. Bulma disputes this, saying that when everyone got together five years ago he didn’t even show up because he was off training. Goku says she sure is becoming a middle-aged lady, and she yells back that Saiyans are freaks. Vegeta says that because they Saiyans are a fighting race, they remain young for a longer period of time so they can fight. Bulma wonders if she should ask Shenlong to make her younger.

Vegeta asks if it’s true that Kakarrot is training for the Tenka’ichi Budōkai tomorrow. Goku says he is, and he thinks Vegeta should enter too. There’s going to be an awesome guy entering. Vegeta doesn’t feel any strong ki, but Goku says that’s because he’s been suppressing his ki. Vegeta says there shouldn’t be anyone like that, and asks if he’s an alien. Nope, he’s an Earthling. Trunks then shows up, and asks Goten if he’s training to enter tomorrow. Goten reluctantly says he is, but only because his dad made him, even though he said no. He had a date tomorrow. Goku says he can go on a date any time. Vegeta says both of them have troublesome kids, and Goku agrees. Pan then arrives, and tells Grandpa she just flew around the Earth. Trunks asks if Pan is also entering, who enthusiastically says, “Yep!” Bulma is worried, because there’s no Kids Division this time, and she’ll have to fight adults. Goku says she probably can’t win, but it will be good for her. He also says Pan is now the one with the most will-power amongst them. Vegeta admits he’s quite intrigued now, and says he’ll enter. He orders Trunks to enter also, or else he’ll cut his allowance in half.

The next day, at the Tenka’ichi Budōkai grounds… Satan tells Boo that they’ll do the same as before: Boo becomes the champion of the challengers, then faces Satan, the super champion, in the finals and loses. But he reminds Boo that he needs to hold back his strength against the challengers, or else he’ll scare them all off. Goku then shows up in Satan’s room with Pan, and Satan is very happy to see his cute little Pan. He asks if she’s come to cheer for Grandpa. Nope, she’s entering, and so is Grandpa Goku, Goten, Trunks, and Uncle Vegeta.

Goku says they’ve all passed the preliminaries, and Satan freaks out. Goku reassures him that they’ll allow Satan to win. But someone besides Boo or them might win. Goten asks Satan if he can get all their friends better seats, and Satan says no problem. The gang all get ringside seats now, except that the ring is too high for them to even see. Bulma says they’re changing, because they can’t see anything, and they all move to new skybox seats. Meanwhile, the announcer calls the competitors over for the lottery; there are twelve this time. Whoever makes it to the end will face off against the super champion, Mister Satan, to decide the winner. Vegeta asks Goku who this strong guy is, but Goku still won’t say.

The lottery is beginning, and Goku asks Boo to mess around with the numbers with his magic. The competitors are Vegeta, Son Goku, Mister Boo, Trunks, Pan, Son Goten, Kirano, Mō Kekko, Oob, Captain Chicken, Knock, and Otoko Suki. Goku tells Vegeta he wants to fight this person at 100% in the first round. Mō draws and gets #2, and then Trunks is next. A little later, it’s Son Goku’s turn to draw, and he asks Boo to make him #3. Next is Kirano, and Goku says to make him #6. Vegeta had thought Kirano might be the guy. Next is Oob, and Goku tells Boo to make him #4, and then he doesn’t need to use anymore magic after him. Vegeta is very surprised, as Goku says he’s been waiting a long time and training until this kid entered the tournament. Vegeta wants an explanation right away.

“Ten years ago, when the Boo that was incredibly evil died, I made a wish… ‘This time, be reborn as a good guy, and let’s fight one-on-one’… It seems Enma-daiō heard him and made it happen…” Vegeta can’t believe that kid is the reincarnation of Boo. Goku says it’s no mistake, he just knows it somehow. “Look at even his name. Oob, right? If you read it backwards, that’s Boo, ain’t it…? Wouldn’t that be a strange coincidence?” Oob is looking nervous, thinking there are lots of strong people outside the village, just like his mommy had said. Oob wonders how he’ll win and use the prize money to buy food to bring back to his village. 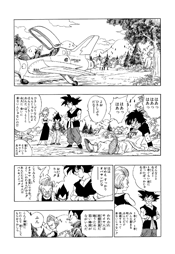 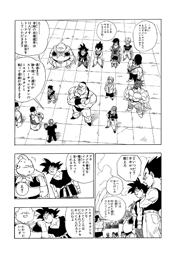 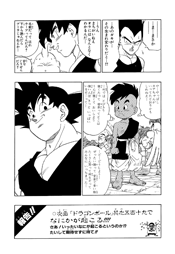