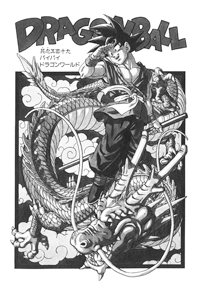 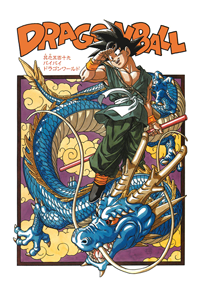 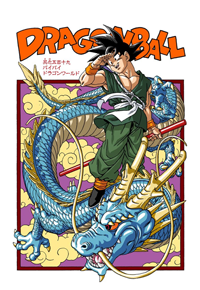 The announcer begins going over the tournament match-ups and procedures, telling everyone to come to the ring when their name is called, etc. They’re free to relax or warm up at the moment, if they wish. Goten is upset that he has to face Boo in the first round, but Goku thinks it wouldn’t be a problem if he hadn’t been so lazy about his training. Mō Kekko pipes in, saying he thinks he should be the one complaining, because he has to face this little kid. Pan sticks her tongue out at him, and he tells her to go home and drink breast milk. However, Otoko Suki is very pleased that he’ll be facing Trunks. Knock then starts calling out Vegeta, making fun of his age. He gets in Vegeta’s face, laughs, and tells him to die. Vegeta nonchalantly punches him away, sending him crashing into a brick wall.

From the center of the tournament ring, the announcer announces that the Tenka’ichi Budōkai is underway and the first match is about to begin. Pan is a genius girl at only age four, and she’s the grandchild of Mister Satan. Her opponent, Mō Kekko, lost to Mister Boo in the semifinals of the last tournament, and is 2 meters, 30 centimeters tall (7.5 feet). Some fans in the crowd can’t believe they’d allow such a much, and Satan hopes Pan will be okay. The match begins, and Mō Kekko supposes he better get this over with, but Pan quickly jumps up and punches him in the face, then kicks him out of the ring straight into the arena wall. Once it’s made certain he’s still breathing, Pan is declared the winner, and she cutely bows. The announcer says it is time for the second match to begin, reciting Goku’s decorated past and introducing Oob, who is a 10 year old boy who has come all the way from an island in the south. Bulma feels bad that the poor kid has come all this way just to lose to Son-kun. Piccolo tells Dende that this is the match to pay the most attention to this time.

The match begins, and Goku tells Oob not to be nervous, or else he can’t put out his true strength. Oob nervously says okay, and Goku thinks it’s no use, as he clearly hasn’t calmed down. Goku thinks he has no choice… “Hey you! Get your ass over here, you bastard! I pretended to be a good guy around everyone earlier, but really, I’m very very bad! Why you… I, uhh, hate you! I’m gonna knock you out. Also, uhh, I’m gonna beat you to death, and do you want me to bring your bones home! Uhh… Your outie-belly-button mommy is waiting!” Oob protests calling his mommy that. “Well, then is she a shit? Yeah, yeah, she’s a shit, huh?!” Trunks and Goten wonder what he’s doing. Goku thinks he’ll finish it now, and flies at Oob saying, “Your daddy is also a shit!!”

Goku kicks Oob in the face, and then backs off. Oob gets pissed and says his father and mother aren’t shits, as he rushes toward Goku with a kick. Goku blocks it, but his arm really hurts afterwards. Goku barely dodges a punch, and then backflips away from a kick. Goku flies at Oob with a punch that Oob just barely blocks, and the two rapidly exchange multiple blows. Everyone is shocked to see this kid hold his own against Goku. Oob yells, sending a kiai that sends Goku flying up into the air, but is shocked to see Goku catch himself and just float in the air. Goku lands, and notes that Oob still doesn’t know how to fly. Goku says he couldn’t have learned that without having a teacher. Goku apologizes for the badmouthing earlier, explaining that he merely wanted to see Oob’s true strength. Goku thinks he certainly is impressive, but what good is fighting if he doesn’t know how to use his power.

Goku offers to come live with Oob and teach him. Oob says his home is poor, and that’s why he needs the prize money. Goku says that’s no problem, since he can borrow lots of money from Mister Satan. Goku says that Oob will be the one to protect the peace from now on, and then tells him to wait here, as he flies up to inform everyone of his plan. “I’m gonna train this guy and go live at his house. I don’t know how long it’ll take, but I’ll come back a lot. Be good, okay. See ya!” Gohan is very confused with everything that’s just unfolded. Goku goes back to Oob and tells him to climb on his back and hold on tight, since they’re flying all the way to an island in the south. Goku zooms off, and Trunks and Goten wonder what just happened. Everyone in the sky box is confused, but Piccolo smirks and says this is the happiest he’s seen Goku in a long time. Vegeta knows what Kakarrot’s scheme is, and it’s not just to train Boo’s reincarnation to protect the peace. As they fly away, Goku tells Oob they should have a proper rematch once they’re done training. Oob agrees, and Goku admits that’s his true objective.

Goku thinks it’s exciting to meet someone so strong, and Oob agrees. As the two zoom by, Goku tells Oob he’ll get even stronger, and Oob says, “Yes!!” Thinking that’s not excited enough, Goku tells him to yell, “Yeah–!!”, and Oob follows suit, as the two disappear off into the distance….

“The great adventure of Goku and his friends, concerning the Dragon Balls! I can only show it to you all up until here, the end… Even after this, there will probably be various troubles, but somehow they’ll surmount them, without a doubt… It’ll be all right, because they’ve got the Dragon Balls…!”

As the two fly along, Goku thinks he has something he should give him, but Oob isn’t sure what he means. Goku calls out, “Kinto-Un!!” The two stop, as Kinto-Un flies up to them. Goku says it’s great to see Kinto-Un, as it’s been so long, and he tells Oob to try getting on. Goku then nonchalantly drops Oob, who is kinda freaking out, onto Kinto-Un. “You got on just fine! Just like I thought!” Goku tells Oob to just think of where he wants to go, and then Kinto-Un suddenly zooms off. Goku follows along, with a big smile, and the two fly off into the distance…

“I am only able to show you the story of Son Goku, his many friends, and the Dragon Balls, up to this point, the end. Even after this, we can probably expect that there will still be various troubles, no different than before. But somehow, they’re definitely going to overcome them… It will be all right, because on Earth, there are some incredible guys…!!”

Back at the Tenka’ichi Budōkai, as the crowd cheers on, Vegeta smirks. “Sooner or later, Kakarrot, I will show you defeat… Hmph!” 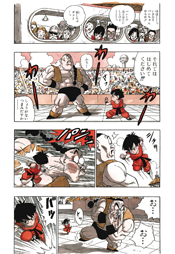 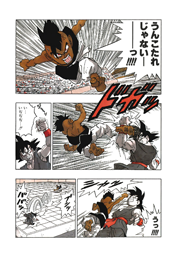 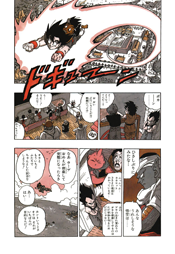