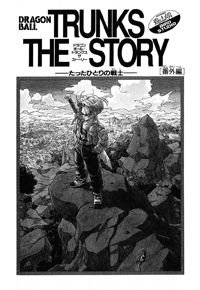 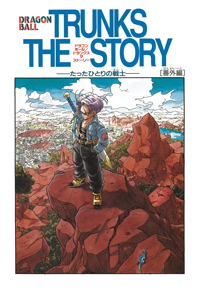 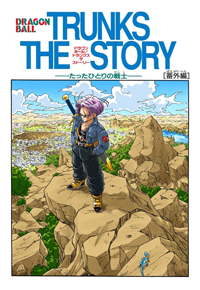 Trunks the Story –A Lone Warrior–

“The future…” Trunks, pretty young, is a Super Saiyan, and he’s practicing against a grown-up, one-armed Gohan. Gohan tells Trunks he’s doing well, and the two break from stances. They both sit down, on a cliff overlooking a city, and Gohan says that Trunks may have surpassed him. Trunks says his arm will never come back now that all the senzu are gone, but Gohan says what’s gone is gone. Trunks mentions that his mom always says that when he wears that dōgi, he looks just like his father Goku, and it always surprises her. Gohan says he wears it because he wants to be strong like his father, although unfortunately it’s not that simple.

There’s an explosion in the nearby city, obviously caused by the artificial humans. Gohan turns Super Saiyan, telling Trunks to stay here. Trunks wants to go too, thinking he’s strong enough now. Gohan does the old “look over there” thing, and pops Trunks on the neck when he’s turned away, knocking him out. Gohan says, “Should you die, there would be no warriors left to protect the Earth. Years from now, you’ll be the last warrior able to defeat those artificial humans.” Gohan then flies off into the city. No. 17 is blowing up some buildings, but No. 18 tells him to stop, and suggests they go somewhere else. There’s a hiding place with lots of humans to the north. No. 17 says if they kill everyone, they’ll have no more fun. No. 18 says they can kill people with a car as a game, as she blasts some guy behind her who’s trapped under some of the wreckage.

Gohan suddenly flies in and kicks No. 17, knocking him into a pile of rubble. No. 18 laughs at him as he gets up, with his clothes all tattered. No. 17 is annoyed, since he liked this outfit. It’s not as durable as his body, and now he only has four of these outfits left. No. 17 tells Gohan he’s doing well for getting out alive, it’s been about a year now. Gohan says he’s trained this time, and now it’s their turn to get beaten up. No. 17 doubts that, and says last time he only used half his power. Gohan freaks out, and No. 17 says he won’t let him get away this time. No. 17 rushes at Gohan, while No. 18 smirks. Meanwhile, Trunks wakes up, and freaks out that he can’t feel Gohan’s ki. Trunks flies over the city, until he spots Gohan lying dead in the street. He lands next to him, and screams with tears rolling down his cheeks, pounding the pavement in frustration.

“Then about three years later…” Trunks, now older, takes some groceries inside, saying hi to his mom. She’s busy working on the time machine, and says it’s finally able to charge enough energy for a round trip. It takes eight months just to charge it, so they don’t have time to test it. It would’ve come out better if the lab hadn’t been destroyed, though. Trunks says now he’s probably strong enough to defeat the artificial humans. Bulma tells him he’s so naive. He certainly has gotten really strong, but she doubts he could be that much greater than Gohan was three years ago. Trunks insists that he’s strong enough though, and then there’s a radio briefing saying that the artificial humans are currently 300 kilometers south of West City. Trunks thinks that’s nearby, and then sets off, in spite of his mom’s objections. Trunks thinks today he’ll get revenge for all the people who’ve been killed.

“Five days later, in a little hospital outside of West City…” Trunks is lying in a hospital bed, with Bulma in a chair next to him, reading. Trunks says she was right, he’s still no match for the artificial humans, and thinks he was lucky to get out alive. Bulma says he has strong luck, just like his mother. Trunks says when his wounds heal, he wants to ride in the time machine. Bulma says first they need to get some medicine for Gohan’s father, because she thinks that if he hadn’t died from the heart disease, the world wouldn’t have ended up like this. Trunks asks if he was really that strong. “He was certainly strong, but… No matter what tremendous things happened, somehow or other, he always seems to do something. He would give you such a mysterious feeling.” Trunks says he wants to meet his own father too, and Bulma tells him not to get his hopes up about that. Some time passes, and Trunks is prepared to leave in the time machine. Bulma gives him the medicine, and then he leaves for the past. 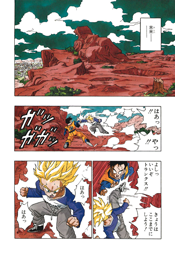 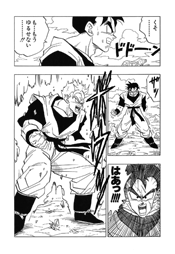 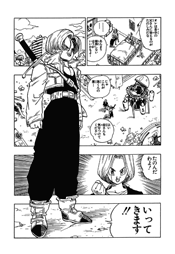